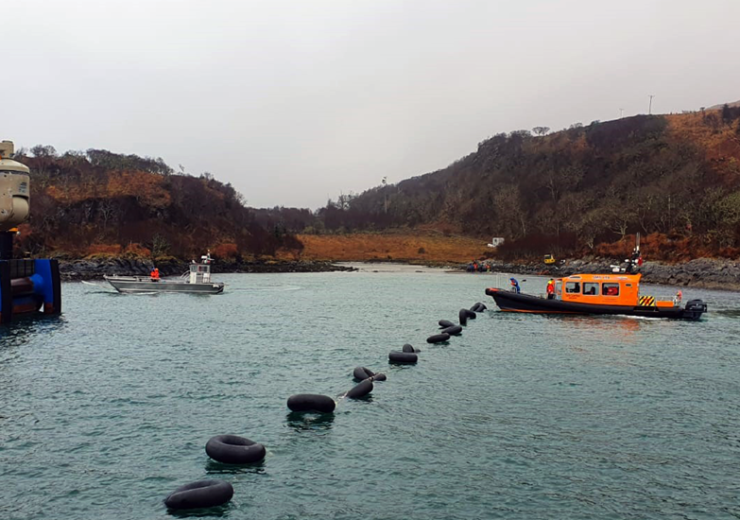 Image: A project to replace the submarine electricity cable connecting the Isle of Jura to Tayvallich in Argyll is now complete, following a cable fault in November. (Credit: SSSE.)

Teams from Scottish and Southern Electricity Networks (SSEN) connected the new cable to the main electricity network on Tuesday 31 March, returning the network to normal operation to ensure a safe and reliable supply of electricity to the islands of Jura, Islay and Colonsay.

SSEN received a marine licence to carry out the cable replacement on 24 January and a specialist marine vessel sailed to the west coast to commence installation as quickly as possible. Continued unfavourable weather conditions meant SSEN’s teams were unable to secure the three-day window of suitable sea conditions required to lay the cable.

The vessel remained on standby and was mobilised at first light on Wednesday 25 March to commence installation, with SSEN’s regional teams making final connections to energise the cable on Tuesday 31 March.

Since November, Jura, Islay and Colonsay have been powered by a combination of Bowmore Power Station and local renewable generation to ensure customers on the islands continued to receive the power they need.

“Keeping the power flowing to the communities we serve is our key priority at SSEN and we’d like to take this opportunity to thank the community and local businesses for their patience and support as our teams worked on this essential cable replacement project.

“Adverse weather conditions, including Storms Brendan, Ciara and Dennis, presented our teams with various challenges along the way, but I’d like to thank everyone involved, from our subsea teams, contract partners and renewable generators; to our colleagues working on the islands, Bowmore Power Station, and our control room for their continued efforts to help return the network to normal operation as soon as possible.”

“SSEN and their partners have done a tremendous job in restoring the link despite appalling weather delaying the operation for a considerable period of time. Their commitment to ensuring that the islands are connected has been total even though it has involved laying a completely new cable at very considerable cost. They have also been very good at keeping the communities – and elected representatives – informed. I am sure everyone is grateful to them – and everyone hopes it will never happen again.”