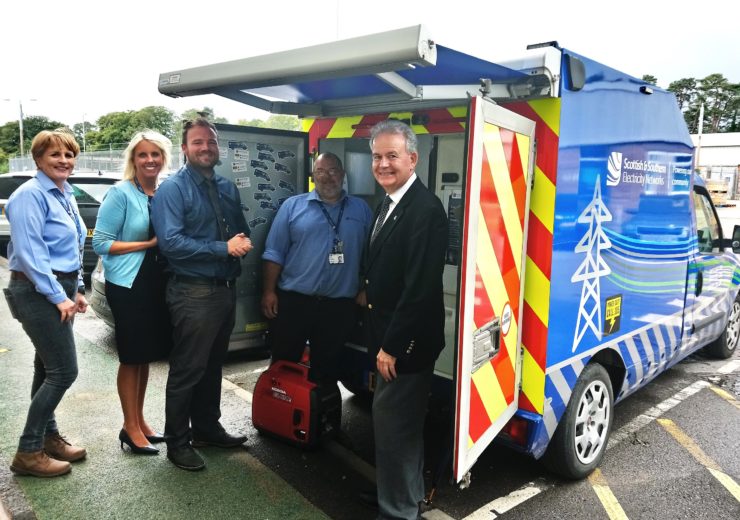 Image: Officials from SSEN among others. Photo: courtesy of SSE.

A £32million investment programme to boost the resilience of the electricity infrastructure across southern England, has been welcomed by New Forest East MP, Dr Julian Lewis.

The project is being delivered Scottish and Southern Electricity Networks (SSEN) and representatives recently gave Dr Lewis a tour of his local depot.

The substantial improvement programme which reaches across parts of Hampshire, Wiltshire, Somerset and Dorset includes the replacement of poles, conductors and plant such as substations and underground link boxes.

Innovative automation systems have also been placed on the network and some sections of overhead line have been undergrounded.

All measures will improve the resilience of power supplies to homes and businesses across the region – supporting growth and wider community needs.

Network reliability is a key priority for SSEN and the customers its serves and SSEN’s multimillion-pound investment to further improve network resilience and future-proof its infrastructure for customers’ changing demands follows local customer engagement. This is part of SSEN’s commitment to ensuring customers have more involvement in investment decisions in vital infrastructure.

Head of Region for Wessex, Jo Niven, discussed the importance of the projects with Dr Lewis and outlined how they will support a reduction in power cuts to his constituents.

Jo said: “As a responsible network operator, SSEN makes a commitment to our customers to do all we can to keep the lights on 24/7; by completing over £32 million pounds of works across Wessex in the last three years, we are reinforcing that commitment to the residents and businesses across the region who rely on us to power their day.

“This three year programme marks a significant investment to an area which has differing needs across its rural and urban environments, and SSEN embarked on these works to strengthen the power supplies to homes, businesses and communities in Wessex, while reinforcing an infrastructure that it is robust enough to meet future needs.”

Dr Julian Lewis MP added: “I’m greatly encouraged to see the level of investment being made in the electricity infrastructure that powers the homes and businesses of my constituents.

“With three years of works completed, SSEN is providing Wessex with a power supply fit for the future and whatever changes may come to the region as it grows and develops in the years ahead.”

While a total of seventeen large-scale projects have been completed in the last three years, five of the key projects benefitting from the £32 million investment are: