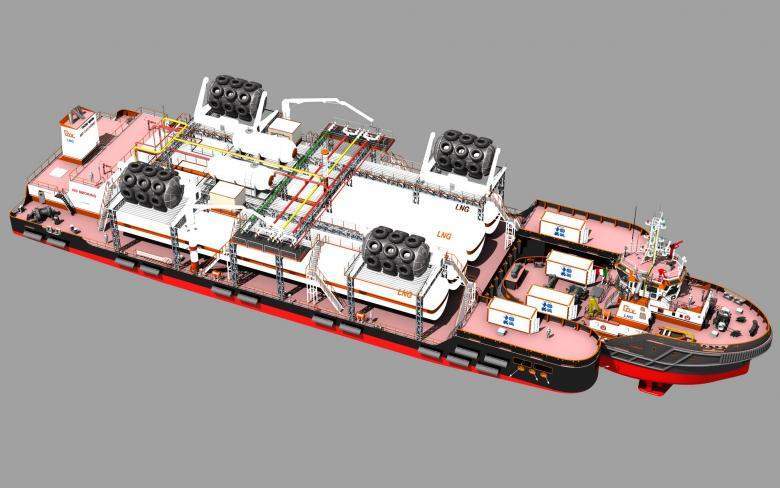 Under its contract, SENER will be responsible for providing basic engineering and technical assistance for the LNG unit’s construction.

The new LNG SBBT unit, which is co-financed by the European Union through the Poseidon MED II program, will operate in Italy and the Adriatic.

According to SENER, the design of the SBBT unit combines an LNG fueled tractor tug with an LNG bunkering non-propelled pontoon of 4,000m3. While the tractor tug is the powered unit, the pontoon will be the cargo unit.

The Spanish engineering company said that the tug will be designed and built as a dual fuel driven, towing, escorting, rescue, supply and salvage tug. It will be propelled by Voith and with 65 tons of bollard pull.

The company revealed the contract from Panfido during the Gastech exhibition and conference in Barcelona where it has showcased its LNG floating solutions.

SENER claims to have the ability to deliver an integral project of the entire LNG value chain with its own technology and engineering.

The company, in a statement, said: “With more than €2.5 billion in LNG contracts and references as EPC contractor such as Sagunto in Spain, Dunkirk in France, Zeebrugge in Belgium or Gate terminal in the Netherlands. SENER has become a leader in the LNG sector, applying technologies developed in-house.”

In another development, the Spanish engineering company said that DNV GL, a global quality assurance and risk management company, has given it an Approval in Principle (AiP) Certificate for two of its new LNG-fuelled bunkering vessels.