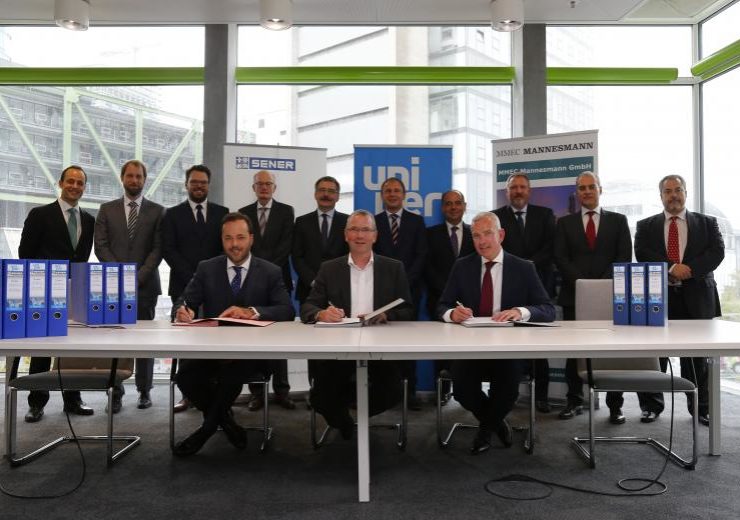 Image: The contract was signed on September, 26th 2019. Photo: courtesy of SENER.

The contract has been signed on September, 26th 2019 at Uniper’s headquarters in Dusseldorf and has been attended, among others, by Uniper’s Chief Operating Officer, Eckhardt Rümmler, SENER Energy Business Manager, Borja Zárraga, and MMEC Chief Executive Officer, Oliver Apelt.

Among the main components to be supplied by the joint venture are two gas turbine and generator sets, two heat recovery steam generators, a steam turbine and generator set and a direct-fired boiler. In addition, as part of the scope of the contract, SENER and MMEC will be responsible for designing, supplying, installing, testing and commissioning the main components, as well as the associated equipment and services required (electrical equipment, instrumentation and control system, civil works, balance of plant, project management services). It is scheduled that construction works of the new CHP plant will begin already in 2020.

Borja Zárraga, Business Manager of Energy at SENER, stated that Germany is an important country for the development of Energy projects for the SENER Group, adding: “We are pleased to have closed this agreement with our local partner MMEC and for a client like Uniper. Definitely, the experience acquired by SENER in multiple previous cogeneration projects will be of special relevance for the successful execution of this contract.”

”We are delighted to execute this major EPC project on our German home turf with a renowned customer like Uniper.” said Oliver Apelt, CEO of MMEC Mannesmann. He added that “MMEC Mannesmann’s strategy, to become a major player in the German energy sector and thus supporting the German “Energiewende”, is picking up speed. We will do our utmost, to deliver this project successfully and thus build a long-term partnership with Uniper and SENER.”

Uniper is an international energy company that generates, trades and markets energy on a large scale, with 11,000 employees in 40 countries and around 34 GW generating capacity.

In Energy, SENER has become a technology solutions and EPC projects’ company recognized the world over for its execution of technologically complex turnkey projects in Europe, America, Africa and the Middle East.