By Kondapuram Sampangi Archana Rani  27 May 2019 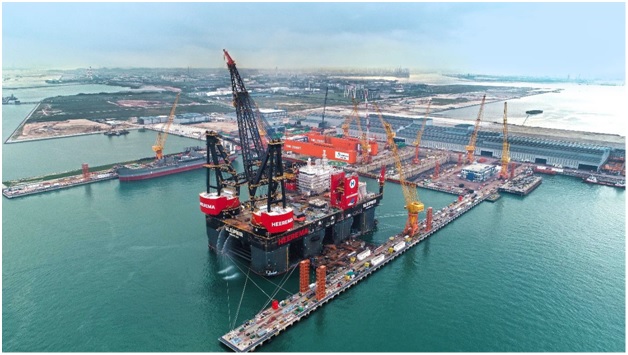 Designed for the setup and decommissioning of offshore oil and gas facilities, the SSCV Sleipnir vessel features a pair of revolving cranes with lifting capacity of 10,000 metric tonnes each and reinforced deck area of 220m by 102m, making it the largest crane vessel to be built, Sembcorp said.

The firm said in a statement: “The world’s biggest semi-submersible crane vessel (SSCV) is set to blaze a trail when it enters into service in the coming months, armed with the strongest pair of revolving cranes for offshore oil, gas and renewable energy installation and decommissioning jobs.”

The £1.1bn ($1.5bn) vessel, which is set to undergo sea trials, is scheduled for delivery to Heerema soon afterwards.

Capable of accommodating 400 persons, the Sleipnir vessel can be deployed globally for installing and removing jackets, topsides, deep-water foundations, moorings and other offshore structures.

The firm said that the vessel, coupled with an IMO- and US Coast Guard-approved ballast water management system, will operate sustainably across all environmental jurisdictions.

Heerema will use the vessel in various offshore energy developments as part of contracts awarded earlier.

Heerema Marine Contractors chairman of the board at Pieter Heerema said: “Sleipnir’s innovative capabilities will place Heerema even firmer at the forefront of developments in the offshore oil, gas and wind energy industry for both installations and decommissioning.”