Sedgman has bagged contracts worth A$100m ($72.8m) from Mach Energy and QCoal, pertaining to their Mount Pleasant and Byerwen coal handling and preparation plants (CHPPs), respectively in Australia. 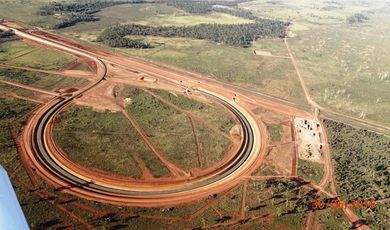 Image: Sedgman wins another contract for the Byerwen project. Photo: courtesy of Sedgman.

Under the contract awarded by Mach Energy, Sedgman will be responsible for the operations and maintenance of the Mount Pleasant thermal coal project located at Muswellbrook in New South Wales.

The three-year contract will fetch nearly A$75m ($54.6m) to Sedgman, which is the CIMIC Group’s mineral processing company. The Mount Pleasant site will commence operations towards the end of 2018.

Located in the Hunter Valley region, the Mount Pleasant coal mine contains resources of 1.1 billion tonnes of coal and 667 million tonnes of recoverable reserves. Currently, construction at the thermal coal mine is on the verge of completion, as per an update from Mach Energy in late August.

Production from the Mount Pleasant coal mine is slated to begin towards the end of 2018.

CIMIC Group’s another subsidiary Thiess holds a mining services contract for the Mount Pleasant coal mine, which will generate it revenue of around A$500m ($364.12m).

Under the contract, Thiess is responsible for the total mining operations at the Mount Pleasant coal project until 2021, which includes mine planning and engineering.

The other contract won by Thiess’ sister concern Sedgman is for the operation and maintenance of the Byerwen coal handling and preparation plant in central Queensland. The one-year contract awarded by QCoal will generate revenue of around A$25m ($18.2m) to the mineral processing company.

The Byerwen CHPP is currently in the process of being commissioned.

In July, Sedgman was given an A$27m ($19.66m) contract for the greenfield Byerwen Coal Mine for a stockpiling and train load-out project.

Sedgman managing director Grant Fraser said: “Sedgman’s strong working relationship with QCoal has developed over many years. We have been closely involved throughout the Byerwen project from the engineering, procurement and construction of the stockpile, train load-out and CHPP. We are pleased to be completing the cycle by operating the plant.

“At Mount Pleasant we are building on CIMIC Group’s long established partnership with Mach Energy and drawing on our relationship with Thiess, also a member of CIMIC Group, to deliver a seamless service that will maximise the value from the site.”