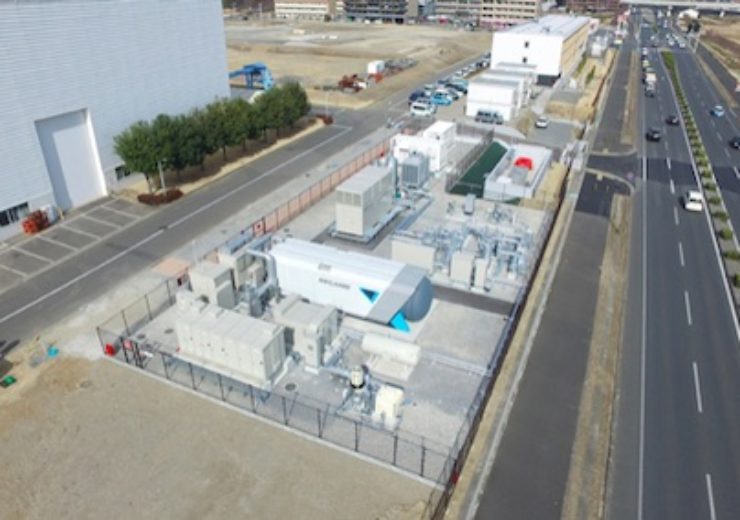 Mitsubishi Hitachi Power Systems (MHPS) received an order in April 2019 from HAZAMA ANDO CORPORTION for MEGAMIE, its pressurized hybrid power system combining a solid oxide fuel cell (SOFC) with a micro gas turbine (MGT). This was the second such order for a commercial application. This system has now been delivered to the HAZAMA ANDO Technical Research Institute in Tsukuba, Ibaraki Prefecture, and operation has commenced. This MEGAMIE system is being used as a next-generation distributed power supply system to support the “HAZAMA ANDO Next-Generation Energy Project,” a nationally backed project aimed at curbing CO2 emissions.

This second commercial-use MEGAMIE system uses city gas as fuel, supplying clean power and heat with low CO2 emissions for the Next-Generation Energy Project. HAZAMA ANDO plans to switch to hydrogen fuel with zero CO2 emissions in the future. This system will have a power generation facility combining cogeneration equipment incorporating a gas engine capable of utilizing a hydrogen fuel mixture with large-capacity sodium-sulfur batteries, and will support a planned energy supply.

The Next-Generation Energy Project is a power interchange verification project for in-house electricity generation utilizing distributed power sources with low CO2 emissions, and supplied to the company’s business locations through a self-consignment system. In August 2018, the project was adopted by Japan’s Ministry of Land, Infrastructure, Transport and Tourism (MLIT) as the year’s “First Leading Project for Sustainable Buildings”.

The first commercial-use MEGAMIE system commenced operations in February 2019 as an in-house cogeneration facility for Mitsubishi Estate Co., Ltd.’s Marunouchi Building in Tokyo. It has continued to operate stably, contributing to the realization of a low-carbon society. This second system will support efforts to lessen the environmental load in energy supplies linked across business locations.

Going forward, MHPS will continue to actively promote the widespread adoption of commercial and industrial-use fuel cells as a solution to challenges facing Japan and world, including ensuring a stable energy supply and curbing global warming. We will also work to further enhance the performance and convenience of MEGAMIE system, and contribute to the type of energy generation best suited to realizing a decarbonized society.