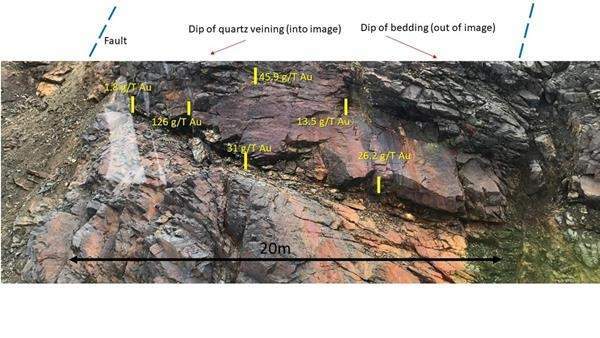 Last year’s drill program, the first ever at Quartz Rise, confirmed the presence of a gold-bearing intermediate sulfidation epithermal system beneath the Quartz Rise lithocap. This was our target concept. The drilling intercepted several narrow, discontinuous intervals of high-grade gold. A subsequent 3D induced polarization (IP) geophysical survey together with detailed geological mapping and sampling of available rock faces indicate that the 2017 drilling may not have been in the correct orientation. New results from cliff face sampling show exceptional gold results (Attached Figure) that appear to correspond with a favorable IP chargeability anomaly under Quartz Rise.

Rudi Fronk, Seabridge Chairman and CEO, commented: “The Quartz Rise target began as a theoretical concept based on our understanding of porphyry gold-copper systems at our KSM project. In 15 months of work, we have learned a great deal and the concept has become a real, data-driven target. We believe we can now find the source of the high-grade gold associated with sulfide-bearing quartz veins at Quartz Rise. Our research continues to uncover compelling reasons why the lithocap may be hiding a significant, near surface epithermal precious metals system.”

Quartz Rise is underlain by Jurassic felsic volcanic stratigraphy consisting of coarse lithic tuff intercalated with densely-welded tuffaceous flows, incestuous porphyritic sills and tuffaceous sedimentary rocks, deposited unconformably on Triassic marine sedimentary rocks. This is the geological time break that has proved to be productive elsewhere in the region. At Quartz Rise, the coarse lithic tuff tends to show much more intense leaching and acid alteration than do the overlaying densely-welded tuff units which appear to have capped the fluid flows.  Exposures of the coarse lithic tuff host in the cliff face have yielded exceptional gold values in more intensely-altered intervals found in proximity to IP chargeability anomalies.

This year’s drilling is designed initially to follow gold-bearing veins in the coarse lithic tuff away from the cliff face into the chargeability anomaly.  Additional holes will test other chargeability targets. The 3,000 meter core program can be expanded contingent on success.

Exploration activities by Seabridge at the Iskut Project are being conducted under the supervision of William E. Threlkeld, Registered Professional Geologist, Senior Vice President of the Company and a Qualified Person as defined by National Instrument 43-101. Mr. Threlkeld has reviewed and approved this news release. An ongoing and rigorous quality control/quality assurance protocol is employed in all Seabridge drilling campaigns. This program includes blank and reference standards. Cross-check analyses are conducted at a second external laboratory on at least 10% of the drill samples.