Sabina Gold & Silver said that it has expanded the Nuvuyak discovery at its 100% owned Back River gold project in Nunavut, Canada with multiple new gold intercepts during the 2018 summer exploration diamond drilling program. 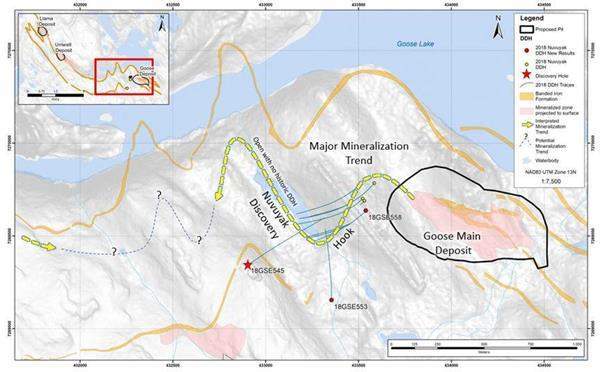 Drilling has continued on the new high-grade Nuvuyak discovery returning significant results. Initial drill intercepts have now been returned from follow up drill holes in the up-plunge direction of the initial discovery hole 18GSE545 which returned 11.58 g/t over 39.50m.

Notably, and higher up in the drill hole, significant values of 9.48 g/t Au over 9.10 meters and 7.44 g/t over 6.40 meters were intersected in an area historically called the Hook zone.

These results may point to the discovery of a newer higher-grade mineralization zone that occurs at shallower depths than had previously been recognised. An additional 8.58 g/t over 4.90 meters and 4.50 g/t over 4.10 meters intersected in drill hole 18GSE553 is interpreted to represent up-plunge mineralization to Nuvuyak.

These drill holes have demonstrated an immediate extension of the zone approximately 130 to 500 meters from the discovery hole toward the previously identified Hook target which likely demonstrates a link to the plus one million ounce Goose Main deposit resource.

Extensional intercepts within the drill holes have strong pyrrhotite and arsenopyrite mineralization as well as abundant visible gold similar in style to that seen at the Nuvuyak discovery hole, 18GSE545, and at other high-grade Back River gold zones such as the Umwelt Vault Zone.

These observations support the potential for the recognition of a large-scale, property wide, gold structure that continues to remain open for exploration.

Sabina Gold & Silver president and CEO Bruce McLeod said: “The drilling of multiple new high-grade intercepts at Nuvuyak and a possible new zone at the Hook target area is now rapidly expanding the footprint of another major gold discovery at Back River.

“Although it is early days yet, we see a lot of similarities in the potential of the emerging Nuvuyak gold structure, when we compare it to the significant size and mineral tenure of the Goose Main deposit. Our team is very excited about this new discovery and it is another strong example of the organic growth we continue to achieve at Back River as we build towards the development of this world class district scale gold project.”

Additional holes have continued to test the discovery with a focus on developing mineralization controls while yielding meaningful expansion up and down-plunge.  Due to the exploration success and strong mineralization intersected in drill hole 18GSE558 this hole was used as a parent hole for two wedge off-cuts (results pending).

Drilling for the 2018 summer season has now been successfully completed. Assay results will be released in a timely manner upon QAQC review, compilation and interpretation. An additional seven holes for the Nuvuyak zone have assays pending.

The mineralization is hosted within a polyphase folded sequence of the Back River lower iron formation stratigraphy and coincident gold structures that are interpreted as being a significant component of the major mineralizing horizon(s) at the Goose Property.

Mineralization consists of arsenopyrite, pyrrhotite and abundant visible gold over broad intercepts that are associated with quartz veining and moderate to strong amphibole and chlorite alteration.

Early interpretations of the Nuvuyak zone and its similarities to the high-grade Umwelt Vault zone recognize the potential for a large-scale mineral trend extending from Goose Main to Umwelt Vault that may transect large portions of the central Goose property, much of which is largely underexplored.