The autonomous operation is one of the unique features of IHC’s SOV, which has been in development for several years and based on extensive input from industry stakeholders 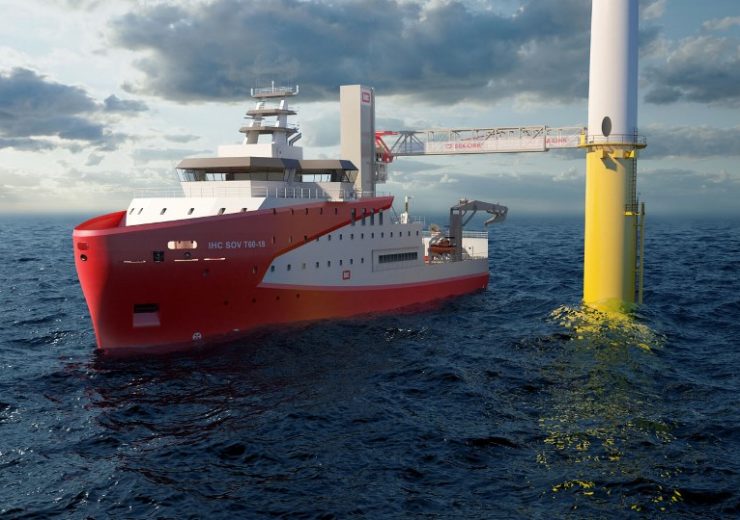 For the project (part-funded by a subsidy from TKI Wind Op Zee), IHC has developed technology that will allow one of its SOVs to navigate safely through an offshore wind farm and provide access to the turbines. The operations will be executed by the vessel’s autonomous software while under the supervision of the duty officer at the wheelhouse.

As such, the operator benefits from having an integrated solution that provides enhanced workability by incorporating the dynamic positioning system (DPS), the motion-compensated gangway and vessel movements.

An integrated approach
The autonomous operation is one of the unique features of IHC’s SOV, which has been in development for several years and based on extensive input from industry stakeholders. By providing an integrated approach to the SOV design and mission equipment, high performance standards can be achieved.

Following the powering and seakeeping tests, the DP assessment was the final series of model tests for the vessel, and will provide input for the ship models in IHC’s autonomous SOV simulator. At the same time, the tests have proven the motion characteristics and position keeping capabilities of the SOV, as well as IHC’s DPS.

Upon completion of the project in December 2020, a simulator will be in operation that encompasses all functional systems of the autonomous vessel. The simulator will then be used to demonstrate the feasibility of the system and benchmark efficiencies.

By improving safety, increasing workability and reducing operational expenses, it is expected that the implementation of the autonomous SOV will lead to a significant reduction in service and maintenance costs of the offshore wind farm.

Unlocking further opportunities
“A next phase of the project will focus on the further development of the autonomous navigation and control functionality,” says MARIN’s team-lead Autonomy & Decision Support Egbert Ypma. “This project provides an excellent case in demonstrating the full potential of an autonomous functionality in an operational setting. The challenges lie not only in the development of this functionality but also in the validation and testing of the whole system in order to prove its robustness against malfunctioning sensors and subsystems.

In addition, a validated simulation environment – with the ability to interface with the DPS and other automation systems – provides the opportunity to safely test the vessel to its limits and beyond. The follow-up to this project will present many opportunities for IHC and MARIN to jointly explore the challenges that lie ahead.”

IHC’s product manager Jeroen Hollebrands adds: “We are pleased with the results of these tests at MARIN’s basins and the cooperation between both organisations was exceptional. We tested the vessel’s seakeeping behavior and position keeping in challenging environmental conditions similar to central North Sea with 3 to 3.5 meter significant wave height. These tests have given us great insight in the performance of the vessel and IHC DP system and gives us confidence to build SOVs capable of operating in these conditions.

The autonomous operation is one of the unique features of our SOV, and has been in development for several years. The results will be implemented into our autonomous SOV simulator model, with which we want to show the vessel in action to industry stakeholders. Moreover, we can then take the next steps towards the development of an autonomously operating SOV as a prototype.”