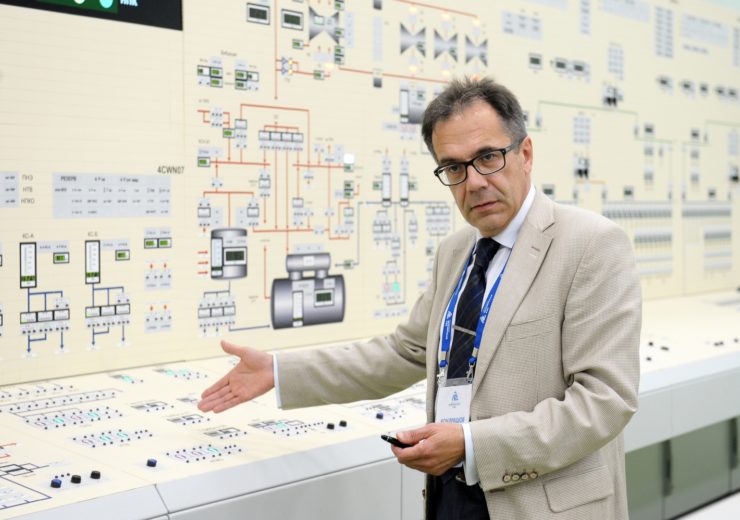 The commission in charge of verifying the full-scale BN-800 simulator of the Beloyarsk NPP signed an acceptance certificate stating that the simulator can be used for staff training.

Grigoriy Hahulin, the commission chairman and the director of staff training department at the Rosenergoatom Joint-Stock Company, noted: ‘The commission verifying the simulator included the project design team, the operating company, and the Beloyarsk NPP. Both the simulator equipment and the project algorithms are designed to the highest possible level, fully comply with the technical standards, and have no defects’.

The full-scale BN-800 power block simulator (unlike the analytical one, which has been in place at the Beloyarsk NPP training center for a while) is a full copy of the block and the backup control points of the 4th power block. The composition and the location of screens, controls, instruments, the whole work place human engineering factors, including the phone equipment and computer mice, are identical.

The full-scale BN-800 power block simulator was in development in 2012-2019. The project was designed by the All-Russian Scientific Research Institute for Nuclear Power Plant Operation, the Experimental Scientific-Research and Methodology Center “Simulation Systems” was in charge of the mathematical modelling and software, and the Ural electromechanical plant produced the equipment. The simulator has undergone a number of tests: design, acceptance, operation authorization, etc. The execution of the clearance act stating that the simulator is good to go with the staff training marks the final milestone. The project will now be used for operation.

With this simulator, the operating staff can practice at any power block mode: normal operation, start-up and stops, diversions or breaches and different combinations of those. The instructor is technically enabled to interfere with the training scenarios and make things harder, for example, to introduce additional ‘faults’ for particular equipment.

Each operating staff member working at the block control unit undertakes a 144-hours’ training on an annual basis, and 96 hours of those are used to practice their skills at a simulator.

Proper training and ongoing sustainment for the operating staff managing the power block is a key element of safe and reliable work for the benefit of the local residents who get electric power supply from that nuclear power plant.