Rio Tinto has inaugurated a $350m fourth diamond pipe, dubbed A21, at the Diavik Diamond Mine in the North Slave Region of the Northwest Territories, Canada. 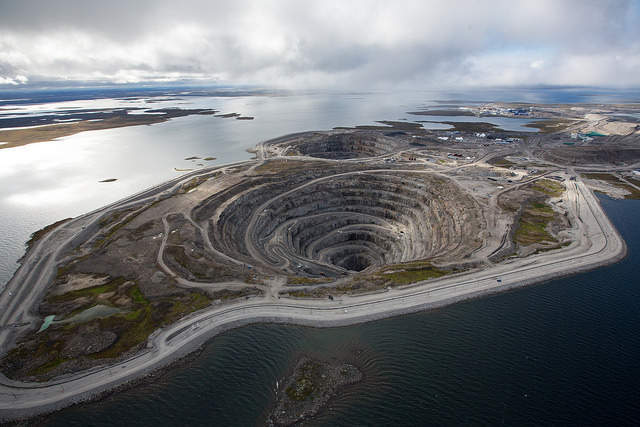 Image: Aerial view of the the Diavik Diamond Mine in Canada. Photo: courtesy of Rio Tinto.

The mining giant expects the new open pit pipe to be a key source of incremental supply for the next four years to maintain production levels at the Diavik Diamond Mine.

The A21 fourth kimberlite pipe ore body is located near the existing mining operations of the diamond mine at the Lac de Gras lake.

A21, which had its first ore extracted in March, is anticipated to achieve full production during the fourth quarter of this year, having taken about four years for its construction under shallow waters of Lac de Gras.

The Diavik Diamond Mine, which had been in commercial production since 2003, is owned 60% by Rio Tinto with Dominion Diamond owning the remaining 40%. The partners shared the development cost of the A21 fourth kimberlite pipe ore body as per their ownership percentages in Diavik Diamond Mine.

“It is a remarkable achievement to deliver this project safely and ahead of time in such a challenging environment, positioning Diavik to continue meeting the demand for its outstanding diamonds.”

Apart from the newly opened A21 fourth kimberlite pipe ore body, the Diavik Diamond Mine features three other diamond-bearing kimberlite pipes – A154 South, A154 North, and A418. The diamond mine is expected to sustain its production till 2025 as per its current mine plan.