RedZone Resources has commenced its trenching program at the Fortner Boyd Lithium exploration property in Arizona. 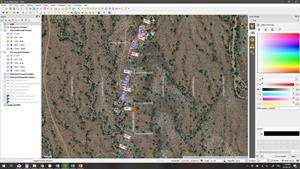 The objective of the trenching program is to channel sample multiple pegmatite outcrops which will assist in identifying drill targets hosting lithium mineralisation. Trenching will also enable the Company to gather samples from below surface that have been less affected by weathering, which may have diluted the Lithium grades of the previously collected surface samples.

The trenching team mobilized July 23, 2018 and completed the first trench of the Lucky Mica Dyke on the first day of work (Trench LMT-2; see attached map).  The crew have now begun work on the second trench (LMT-3; also on attached map). Trenching is being conducted by EEC Corp, an Arizona company based out of Tucson, Az.

The first two trenches (LMT-2 and LMT-3) were planned over surface expressions of lithium bearing pegmatite outcrops,  with surface sampling results including 0.31%, 0.69%, and 5.11% Li2O in grab samples (see map). Trench LMT-2 trench was excavated perpendicular to the strike direction of the Lucky Mica dyke. The trench is approximately 1.5 m in width and was dug to a depth of approximately 1.5 m to reach fresh rock exposure.  Preliminary observation on LMT-2 show the pegmatite having a thickness of 15 meters with visible spodumene mineralization in the outer margins of the dyke. The center zone is mainly composed of feldspar.

The trenching program will be carried over approximately 20 working days and will focus on excavating and sampling up to 19 trenches. Trench samples will be collected at intervals of 5 feet (1.5 m); adjusted to geological contacts.  Samples will be sent to Skyline laboratory in Tucson, Az, for lithium assaying by ICP. QAQC samples including blanks, standards and field duplicates will be inserted through the sampling stream at a rate of 5% of the total sample count. A preliminary metallurgical composite will also be assembled using the channel samples to assess recovery and concentrate mineralogy and quality.

Results will be analyzed by our lead geologist, Mr. Jean-Philippe Paiement, P.Geo., M.Sc., and will be used to inform the drilling program planned for later this year; with the objective of defining an initial mineral resource on the Property.  Definition of any such resource will be subject to success in this drill campaign.

The budget for the trenching program is estimated at $100,000 USD. RedZone currently has $1.3 million CAD in its treasury.

All scientific and technical information in this press release has been prepared under the supervision of Bernie Stannus, P. Eng. a consultant to EEC, and a “qualified person” within the meaning of National Instrument 43-101.