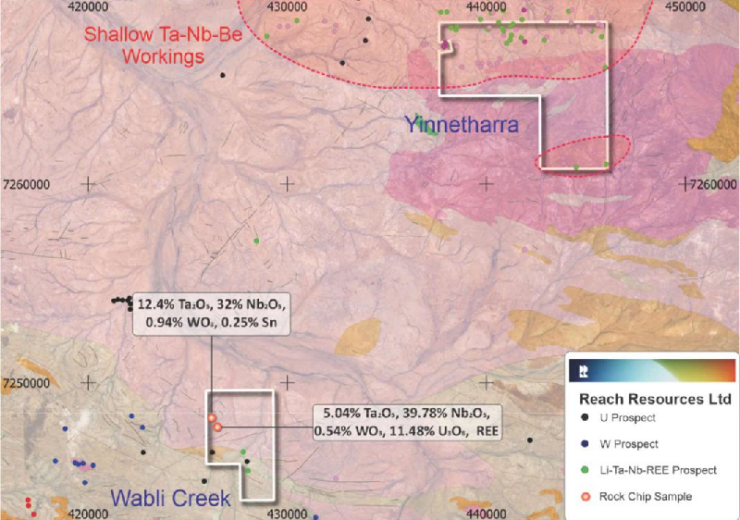 Reach Resources Ltd (ASX: RR1) (Reach or the Company) is pleased to announce that it has entered into a conditional Binding Heads of Agreement (HoA) to acquire all of the shares in Critical Elements Pty Ltd (CE) which holds exploration licenses EL 09/2354 and EL 09/2377 in the Gascoyne Province of Western Australia.

Small scale alluvial and primary pegmatite mining has been sporadically undertaken. Exploration activities have been primarily focussed on tantalum-niobium-beryl-mica and to a lesser extent uranium. Sampling of a zoned pegmatite containing discrete blebs and pods of euxinite (niobate-titanate), samarskite, and uranopyrochlore.

The Gascoyne Project is located 250km east of Carnarvon, 900km by road to the north of Perth. Access to the Project is via the Carnarvon or Mullewa to Diary Creek homestead thence along the Mt Augustus Road. Access within the tenure is via historical exploration/mining and station tracks.

The Project is located within the Gascoyne Province which is located at the western end of the Capricorn Orogen, a major zone of tectonism formed between the Archean Yilgarn and Pilbara Cratons

Basement to the province consists of the Glenburgh Terrane, which comprises granitic rocks of the Halfway Gneiss with igneous crystallization ages typically between 2660 and 2430 Ma, psammitic and pelitic rocks of the Moogie Metamorphics deposited between 2240 and 2125 Ma, and a 2005–1970 Ma Andean- type batholith (Dalgaringa Supersuite).

Middle Proterozoic sediments of the Bangamall Basin unconformably overlay the Gascoyne Province to the east and Palaeozoic Carnarvon Basin sediments to the West.

Exploration in the region commenced in the early 1970’s which led to the identification of multiple uranium occurrences within calcrete, weathered bedrocks and clays. Regional airborne radiometric surveys identified numerous radiometric anomalies which coincided with mineralised pegmatites.

Two mineralised pegmatites have been the focus of exploration to date at Wabli. The No1 vein has been mapped over 10m in a pit and has potential of extending further underneath soil cover. Reconnaissance assays indicate significant levels of critical element like Nb and Ta.

Project the following activities are planned to be undertaken:

Completion of the Proposed Acquisition is subject to final due diligence which is to be completed by the Company within the next 20 days.