The NFE project is unique in the LNG world because of its advanced environmental characters, including significant carbon capture and sequestration capacity 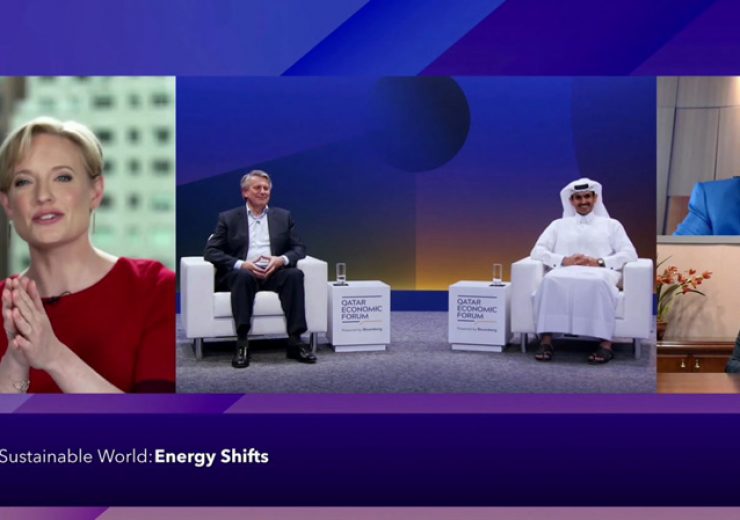 His Excellency Mr. Saad Sherida Al-Kaabi, Minister of State for Energy Affairs, The President and CEO of Qatar Petroleum, said Qatar Petroleum has received offers for double the equity available to potential partners in the bidding process for the North Field East project.

His Excellency Al-Kaabi stated that Qatar Petroleum was in the process of evaluating commercial offers received for participation in the largest LNG development in the world with a capacity of 32 million tons per annum of LNG, and that Qatar Petroleum had received offers that cover double the offered equity stake. His Excellency Al-Kaabi also noted that as part of the same process, Qatar Petroleum had received offtake commitments/ sales and purchase agreements for double the 32 million tons per annum volume on offer.

The NFE project is unique in the LNG world because of its advanced environmental characters, including significant carbon capture and sequestration capacity.

The session, which was also broadcast on Bloomberg TV and its media platforms, focused on the energy transition and the underlying climate change concerns driving net zero emissions targets.

In discussing the ongoing energy transition, His Excellency Al-Kaabi said “We see natural gas and the energy transition -joined at the hip- and gas/ LNG is part of the solution for a longer term transition. We are investing the majority of our CAPEX in LNG, but we are also investing in renewables such as solar, here in Qatar but also worldwide.”

However, His Excellency Al-Kaabi voiced concern that during the global discussion on energy transition, there is a lack of investment in oil and gas projects, which could drive energy prices higher by stating that “while gas and LNG are important for the energy transition, there is a lack of investments that could cause a significant shortage in gas between 2025-2030, which in turn could cause a spike in the gas market.”

On Carbon Capture and Sequestration, His Excellency Al-Kaabi highlighted the fact that Qatar started decarbonizing its LNG a while ago, and that it currently captures and sequesters two million tons per annum of CO2, which will grow to 9 million tons by 2030. “We are doing it very responsibly and we will be part of the solution for the long term,” Minister Al-Kaabi added.

The panelists warned that energy transition is not only about the producers, but also about end users and their consuming behaviors. His Excellency Al-Kaabi also highlighted the fact that the energy transition needs to take into consideration the requirements of the developing world, including the 0.8-1.0 billion people who are deprived of electricity and basic fuels today to ensure a balanced approach that takes human development and economic growth in these developing nations into account, and that actions taken need to be responsible for the collective wellbeing of all of humanity.

In concluding his remarks, His Excellency Al-Kaabi said that in the effort to put policies in place to reduce CO2 level, there is a challenge represented by the bill that has to be paid to bridge that gap, and called for collective work for a carbon pricing mechanism that is fair and equitable and that can be applied seamlessly on a global basis.

The Qatar Economic Forum, Powered by Bloomberg, brings together some of the world’s leaders and the most influential thinkers, executives, and policy makers to prepare a blueprint for the next stage of global growth. Discussion themes during the Qatar Economic Forum cover issues such as leadership in a post-pandemic world, changes to the human-technology nexus, a more sustainable global economy, markets and investing, power and trade flows, and the future of commerce. ​