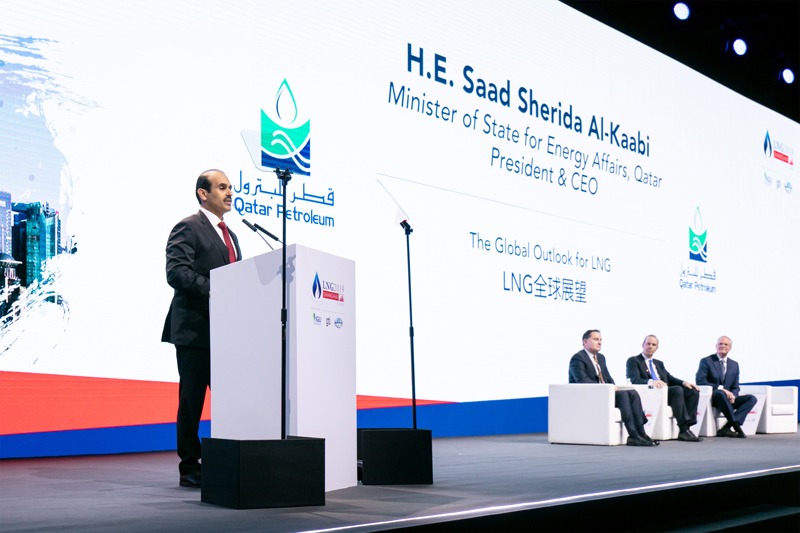 His Excellency Mr. Saad Sherida Al-Kaabi, the Minister of State for Energy Affairs and President & CEO of Qatar Petroleum, in a speech at the 19th International Conference & Exhibition on Liquefied Natural Gas in Shanghai (Credit: Qatar Petroleum)

The world’s largest LNG producer Qatar Petroleum is looking to expand its presence in Brazil and Argentina, according to CEO Saad Sherida Al-Kaabi.

In an interview with S&P Platts, the Qatari energy minister claimed the strategy his company implemented two years ago is proceeding as planned as far as establishing itself as a commercial player like Exxon Mobil or Shell, rather than a state-run organisation, is concerned.

Low gas prices, he claimed, are not an issue, for the firm that supplies half of China’s LNG imports as Qatar Petroleum is confident in the long-term demand of natural gas and the diversity of its market.

He said: “We are looking at the hotbeds of reserves, some portion of our exploration is in frontier areas, others in the hotbeds of the world, like Brazil.

“There is a bidding round coming in Brazil. As well as that, we will be participating in and we bought 30% of all of Exxon’s assets in Argentina.

“We have got five exploration blocks in Mexico and we have a discovery in Cyprus, as well as going with Total in South Africa and Guyana.

“We are a long-term producer, so when we decide to do a project it’s based on the fundamentals of being a low-cost producer.

“Demand for gas is going to be there for a long time. The issue is that if the price is so low it will force the higher cost people to shut down.

“We want to be at the lowest end of that, so no matter what happens in the market, we will always have a market that will give us a margin that we can make money in because of our low costs. So we don’t worry about low gas prices.”

Speaking at LNG2019 in April this year, Al-Kaabi outlined his vision for natural gas as a destination fuel rather than a transition fuel towards renewables.

He said: “While some see natural gas as a transition fuel, we believe it is a destination fuel. It is the cleanest of all fossil fuels. It is reliable, affordable, and the fuel of the future.

“In today’s very complex world, we need stable, reliable, clean and affordable sources of energy to keep that momentum. We also need a clean source of reliable energy – natural gas is that source.”