At the G1/61 project, the company’s mission in strengthening national energy security will continue to be carried out by the staff with extensive experience of the fields, primarily supporting this seamless and smooth operation 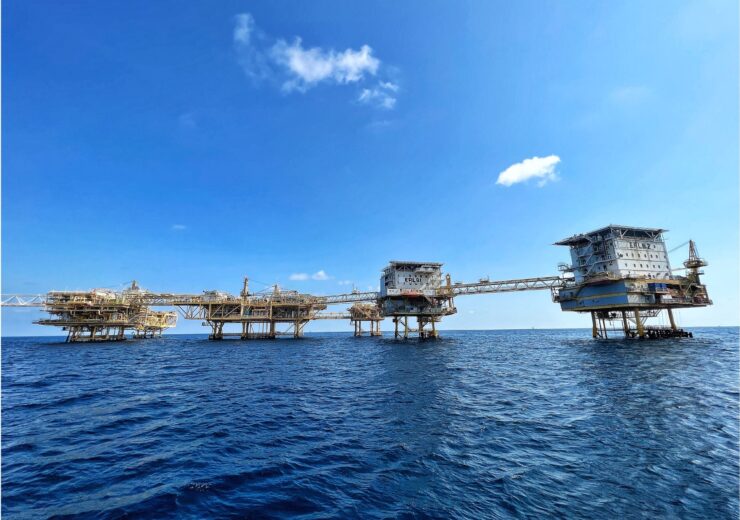 PTTEP becomes the official operator of the G1/61 project (Erawan, Platong, Satun and Funan fields) and the G2/61 project (the Bongkot field) under the Production Sharing Contract (PSC). The company is geared to execute its work plan in raising the natural gas production rate in support of domestic consumption and national energy security.

Mr. Montri Rawanchaikul, Chief Executive Officer of PTT Exploration and Production Public Company Limited (PTTEP), said that PTTEP assumed operatorship of the G1/61 project and the G2/61 project on April 24, 2022 which marked the first day of the PSC. The company has continued its operatorship in the Bongkot field, and the G1/61 project was transferred from the previous operator to PTTEP. To assure a smooth and safe transition of G1/61 project as well as continuously satisfy national natural gas demand, PTTEP set up a war room at the Headquarter and the production platforms and worked closely with the Department of Mineral Fuels and the former operator of G1/61 project.

“PTTEP has continually upheld and been committed to execute our missions in strengthening national energy security. By assuming the operatorship of these sizable natural gas fields of the country, which are vital sources of energy with combined production capacity of 1,500 million cubic feet per day (MMSCFD) or 60% of the nation’s gas supply, we take pride in being Thailand’s energy company and strive to conduct our energy business for the country and all people the best we can,” Mr. Montri added.

At the G1/61 project, the company’s mission in strengthening national energy security will continue to be carried out by the staff with extensive experience of the fields, primarily supporting this seamless and smooth operation.

On the date of operatorship handover, the natural gas production rate at the G1/61 was at 376 MMSCFD.  Due to the absence of continuous development and drilling activity prior to the operatorship transfer to PTTEP, the production rate will gradually decline from the exit rate.  PTTEP was previously not allowed to access the site to proceed the preparation work including the drilling campaign as planned, even though the company was granted for site access in late of 2021, it was about two years behind the plan.

Consequently, PTTEP will continue to produce natural gas from remaining resources of the existing production wells with utmost concern on safety and production stability. Therefore, the production rate will initially stay at approximately 250-300 MMSCFD. The company will thereafter execute its plan to ramp up the production rate to 800 MMSCFD within April 2024. Execution plan includes the acceleration of 8 wellhead platforms and subsea pipeline installation, drilling campaign of 183 production wells and procurement of additional 2 drilling rigs for another 52 production wells are all in place.  PTTEP will also conduct equipment and system inspections as well as maintenance schedules to ensure the readiness and safety of the petroleum production.

With regards to the G2/61, the production will proceed accordingly to the work plan that sets to produce 700 MMSCFD of natural gas.

In order to meet natural gas demand while the increase of production capacity at the G1/61 project is underway, PTTEP will attempt to boost up the production rates of the Bongkot field, the Arthit project and the MTJDA project by approximately 125 MMSCFD, 60 MMSCFD, and 30-50 MMSCFD, respectively. In total, the production output will be raised by 200-250 MMSCFD to minimize impacts on Thailand.