Peikko is a leading global supplier of concrete connections and composite structures. Its innovative solutions speed up customers’ building processes, making them easier and more reliable. Peikko is a family-owned company that employs over 1,200 professionals across 30 countries. 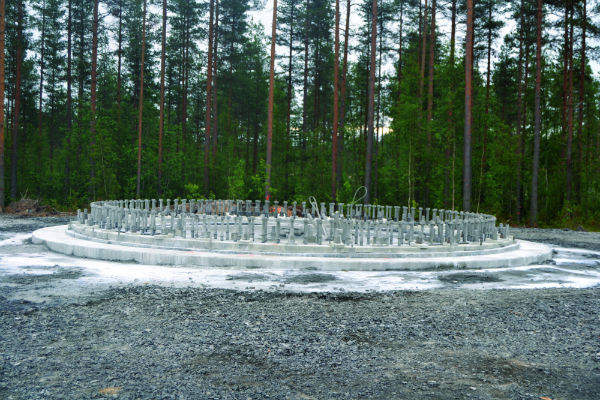 Peikko supplies concrete connections and composite structures to many countries around the world.

Peikko is a leading global supplier of concrete connections and composite structures. Its innovative solutions speed up customers’ building processes, making them easier and more reliable. Peikko is a family-owned company that employs over 1,200 professionals across 30 countries.

Peikko’s main scope is onshore foundations; it offers a range of products from components to turnkey projects. Its customers are original equipment manufacturers (OEMs), investors and contractors. Each stakeholder and project has different needs and the company takes care of them individually. Right now, Peikko’s main volumes are in Europe, but it already has many customers on other continents. For example, an important service area in components is anchor-cage deliveries, including anchor bolts and rings, which it delivers to Europe, Africa, Asia and South America.

Other important areas for the company are carrying out turnkey projects or design, and component deliveries of foundations. Wind-turbine technology is growing rapidly in component and foundation areas, which has meant financial growth for Peikko, but also geographical expansion. It has wind-component production units in Finland, Slovakia and Germany, and is readying new production units to make more efficient wind product deliveries outside of Europe.

Solid as a rock

The company started in 2011 with an experimental project that developed into more pilot projects, which focused on all areas of rock foundations. Six Peikko rock anchor foundations were built last summer at Saarenkylä wind park in Finland, where almost 100 measuring channels cover the full cross-section of the foundations, which will give an accurate overview of the foundations’ performance.

Data collected from the Finnish project, such as recorded wind speed from the turbines, will continue for two years; it is a significant study of wind-turbine rock-anchor foundations.

Peikko has used its FatBar rock anchor bolt in Finland and other projects. FatBar has been the subject of much development and improvements over recent years. Tests conducted on FatBar have shown that it far surpasses the industry standards set for fatigue resistance. FatBar rock is superior to threaded bars, which cannot fulfil requirements set by common metrics. With this technology available, Peikko has invested a lot of time and money into its rock anchor foundations. It boasts state-of-the-art knowledge, which enables it to produce big volumes of rock anchor foundations to be sold globally.

A key element for the company’s rock foundation is its aforementioned FatBar rock bolt. Its R&D has focused on reducing material costs, but also maximising its ability to meet its customers’ demands. For example, the Fatbar 36 and metric M39 anchor bolts have almost the same weight, but the fatigue resistance of the Fatbar bolt can be three to seven times bigger.

The FatBar range is wide. FatBar 36 has an ultimate capacity of 1,070kN, whereas FatBar 56 has more than double the capacity at 2,586kN.

Competition in the industry is fierce, so Peikko is constantly thinking about ways to be more flexible and faster than the rest. Looking at the big OEMs, it is clear that more flexible design procedures, quicker approval processes and more efficient time to market for products are major demands from clients.

Peikko’s foundation tools and services ensure a reaction time to accommodate these requirements. It delivers components or turnkey foundations in under five weeks.

Peikko adapts its foundations to meet the demands of turbines of different sizes. A standard turbine for Peikko’s foundations is 3MW, with a hub height of 120-140m. The biggest design has been 7MW. Turbines that are to be implemented next year have grown, which means Peikko will once again adapt its foundation sizes to fit this change.

At the Saarenkylä project in Finland, there are six rock anchor foundations and three gravity foundations, which the company says are the optimal choice for those in the industry.

Kari Tuominem, director of business development and technology, says: "We are eager to see the start of turbine operations that bring about the first wave of a massive amount of data from our instrumentation."

A measuring rate of 10Hz and almost 100 channels means that there about about 1,000 data points yielding results every second. "Of course, we are making software to filter and process the data, and this project will be on our tables for at least two years, as data analysis will be a massive research task," Tuominem says.

Peikko has proven that its rock foundations are reliable and sought after. It has already secured major projects in Norway and Finland, which are countries with significant rock areas.

While Peikko continues to thrive in Europe, it has recently increased its reach to South Korea, Canada and parts of Africa. The largest delivery outside of Europe was to the Lake Turkana project in Northern Kenya, which required 365 foundations. Africa is an area that promises future growth, and the project in Kenya has paved the way for more business on the continent.

Peikko is enthusiastic to see projects come to fruition. Tuominem says: "It is frustrating at times because it can take a long time for a job lead to turn into a completed project." He cites the project at Lake Turkana as an example, which took five years from the first quotation to the project’s execution.

Peikko offers foundation solutions for every project type, including gravity, rock or extended foundations. It aims to develop its foundations further, but also to continue to upgrade the existing solutions, which have proven to be successful. Its continued global expansion means that existing customers are able to get added value from the new features.

Peikko is excited about increasing its rock anchor foundations in the Scandinavian market next year with plenty of developments in the pipeline. Tuominem says: "Every saving in foundations is our small contribution to overall wind energy goal to reduce cost of energy."