Participation of BULGARTRANSGAZ in the Alexandroupolis LNG project 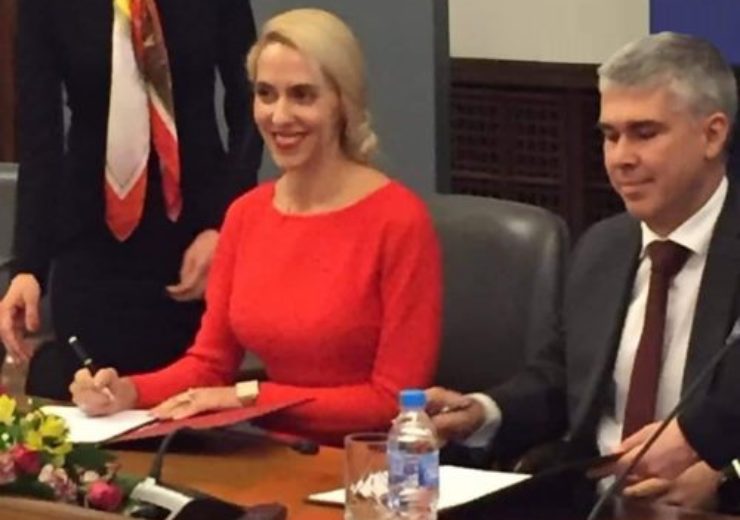 The Council of Ministers of the Bulgarian Government approved the participation of BULGARTRANSGAZ EAD by a percentage of 20% in the share capital of GASTRADE S.A. The terms of the agreement were signed on 8th of January by the Founding Shareholder and Chairman of the Board of Directors of GASTRADE, Ms. Elmina Copelouzou and the Executive Director of BULGARTRANSGAZ, Mr. Vladimir Malinov, in the presence of the Minister of Energy of the Republic of Bulgaria, Ms. Temenuzhka Petkova.

GASTRADE is developing the LNG Terminal in Northern Greece off the shore of Alexandroupolis.

The Terminal comprises a floating LNG storage and regasification unit (FSRU) and a 28 km pipeline system. The LNG storage capacity of the FSRU will be up to 170,000 cubic metres and the maximum daily regasification capacity 22.7 million c.m. The FSRU will be moored 10 km offshore the city of Alexandroupolis and will be connected to the National Natural Gas Transmission System via a 28 km pipeline (24 km subsea pipeline and 4 km onshore pipeline).

This is a Project of European Common Interest (PCI – EU Regulation 347/2013), i.e. a priority project for the European Union. As such this project will enhance the security of supply, diversify the energy sources and routes and support the development of competition in Greece and the wider region of Southeast Europe as well as in the establishment of a Natural Gas Hub in the region.

This project supports and creates great synergies with the Interconnector Greece – Bulgaria (IGB), a project where BULGARIAN ENERGY HOLDING and DEPA participate. DEPA has already signed its participation in the share capital of GASTRADE with also 20%.

The IGB is a pipeline that will transmit natural gas from Greece to Bulgaria and onwards to Serbia, North Macedonia, Romania, Hungary as well as Ukraine.

The decision of the Council of Ministers moves within the frame of the updated Energy Strategy of Bulgaria securing access to Liquified Natural Gas via the Alexandroupolis LNG terminal.

The Managing Director of GASTRADE Mr. Konstantinos Spyropoulos stated,«We welcome BULGARTRANSGAZ at the project and we are happy that we are going to collaborate for its development. The project will enrich the sources and routes of energy supply to Bulgaria reducing the energy cost for the Bulgarian consumers. The experience and the size of BULGARTRANSGAZ will contribute to the successful operation of the project».

The LNG Terminal in Northern Greece is expected to start operations in 2022.