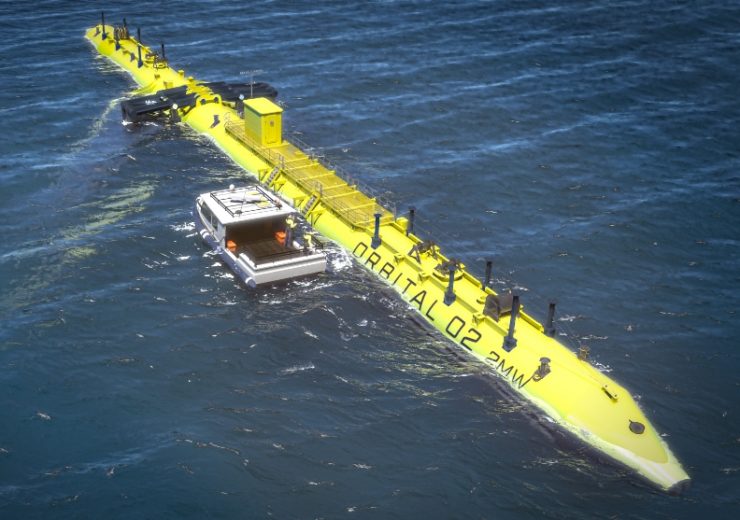 TEXO Group will carry out the work at its quayside facilities in Dundee.

The multi-million-pound contract marks the beginning of major construction for the new tidal turbine, O2, which builds on the 2MW SR2000 turbine.

During the first year of testing at the European Marine Energy Centre (EMEC) in Orkney, Scotland, the 2MW SR2000 turbine generated more than 3GWh.

The Orbital O2 comprises a 73m floating superstructure, supporting two 1MW turbines on either side for a nameplate power output of 2MW, at a tidal current speed of 2.5m/s.

The turbine, with rotor diameters of 20m, will have a 600m² rotor area, the largest so far on a single tidal generating platform.

Orbital O2 is part of a long-term project at EMEC

Part of a long-term project at EMEC, the O2 will become the world’s most powerful tidal turbine and is expected to begin operations in 2020.

The turbine features several innovations to reduce the cost of energy from the company’s disruptive technology and is capable of generating more than 2MW from tidal stream resources.

Orbital CEO Andrew Scott said: “This is a flagship engineering project for the emerging tidal sector and we are delighted to be working with TEXO Group to showcase the very capable supply chain we are fortunate to have around us in Scotland and the wider UK.

“The results that we achieved with the SR2000 over the past two years are a convincing validation of our low-cost approach to generating clean, predictable power from tidal stream energy.

“The Orbital team are really excited to be building on that success with the O2 which we are confident will further reduce costs and cement our position at the forefront of this exciting new renewable sector.”

It has also received support under the Oceanera-Net Cofund project framework, with funding provided by national and regional sources.

Orbital raised a £7m crowdfunding bond at the start of the year to finance the project.

TEXO Group managing director Robert Dalziel said: “We are proud and privileged to be awarded this prestigious contract. The O2 is a pioneering project that will transform the future of tidal energy on a global scale and will be a showcase for the very best in Scottish engineering.”