River dolphin survival is on a knife edge. Their decline has been the result of a wide range of pressure on their habitat. And, according to WWF, dam construction has played a part in this as well, writes Patricia Schelle. 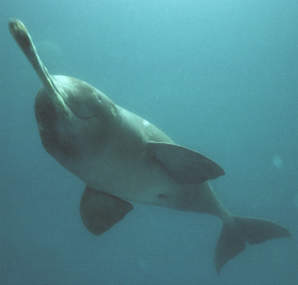 River dolphin survival is on a knife edge. Their decline has been the result of a wide range of pressure on their habitat. And, according to WWF, dam construction has played a part in this as well, writes Patricia Schelle.

The world of wildlife conservation is full of imagery – a quick internet search yields pages and pages of pandas, tigers and orang-utans, with the occasional zebra, elephant or celebrity thrown in.

Search for freshwater conservation and the big picture changes to sweeping aerial shots of river landscapes, waterfalls, the odd fish and finally a lone photograph of a Ganges river dolphin. With its long thin snout, sharp teeth and small eyes, it is hardly surprising that it recently earned a dubious headline, with conservationists wondering if – along with echidnas and pangolins – the river dolphin was too ugly to be saved.

While river dolphins may not score highly on the cute and cuddly scale, to conservationists the presence of river dolphins represents so much more than the health of a single species.

Undisturbed waters
River dolphins thrive in undisturbed rivers – they prefer deep pools and counter currents that form downstream of sandbars and mid-channel islands. They also rely on the healthy functioning of floodplains for their diet of fish and crustaceans, and use the river’s main stem as a migration corridor. It’s not a coincidence that the river basins that are home to river dolphins have some of the world’s highest biodiversity, both in terms of species number and endemism. A thriving river dolphin population can be seen as an indicator that the river is in good health.

Not so long ago, a fifth species, the Baiji, lived in the Yangtze but it was last sighted around 2001 and is now considered extinct. Most river dolphins today are in danger of following the same path, with many populations hanging on to survival by the narrowest of margins.

River dolphin habits mean that it is not easy to get hard data on their remaining numbers. Regular surveys are the only way of getting an idea of the way river dolphin populations are faring.

In India WWF recently facilitated a comprehensive survey of the Ganges river dolphin, covering 2500km of river along the upper Ganga and its tributaries. Over the course of three days, 18 teams consisting of eight observers each travelled along stretches of the river, counting a total of 671 individual river dolphins.

At the same time, teams in China were surveying the Yangtze finless porpoise in the lower Yangtze and in Poyang and Dongting lakes. Initial findings are showing a significant decline in Dongting lake, where habitats are increasingly under pressure. Along the Wuhan-Yichang-Wuhan section of the river, the survey team identified 39 individuals – only around a third of the number spotted in a similar survey six years ago.

Possibly the most dramatic recent figures on river dolphin population come from the Mekong in Laos. Here, only six animals remain as an isolated subpopulation in Laotian waters below Khone falls on the border with Cambodia.

Decline of the dolphins
The decline of the river dolphins is the result of a wide range of pressures on their habitats: destructive fishing methods such as electrofishing and gill nets can be directly fatal, while the noise caused by heavy ships disturbs the dolphins’ use of echo-location to navigate and find food. Rivers are altered and polluted by dredging to make room for more and bigger ships; shoreline development and agriculture also generate pollution and harm floodplain fisheries.

Dams, as well, have had disastrous effects on dolphin populations. Plans for more dams will continue to do so. Dolphin habitats are lost either directly through inundation or through changes in river flows that affect the dolphin pools downstream. As sediment gets trapped in reservoirs, sand bars and islands so favoured by dolphins are eroded and not replenished.

Dams themselves, even very low ones, form physical obstructions to the dolphins that prevent them from accessing parts of their natural range and lead to genetic isolation. Indirectly, dams affect dolphins through the decimation of their food supply: regulated river flows disrupt the spawning conditions required for many fish species.

To ensure the survival of river dolphins, speedy action is needed on many different fronts. Dam operators can play a key role by adjusting dam operations to facilitate environmental flow regimes that help sustain downstream habitats and floodplains. A second approach for existing dams is to invest in upgrading or refurbishing older dams to extend their life spans, thus reducing the need for more new dams. Both strategies should be undertaken with the participation of communities and an investment in research on adaptive management.

It is a stark reality that many more dams are planned for most dolphin rivers. For some (sub) populations, a new dam may be the final blow to their existence. It is therefore crucial that any new dams are built in places where their impact on habitats is minimal and where operations can be managed to mimic natural flows downstream of the dam.

In practice, this may mean that some dams in some locations simply shouldn’t be built at all. Today there are many tools available that can help decision makers and the hydropower sector to make the best possible choices for meeting both the demands of the river and the need for energy.

The survival of the river dolphins, and the health of our rivers, is on a knife edge. The complexity of the threats and actors involved means that there is no single silver bullet to solve the dolphins’ current plight. Instead, action is needed on many fronts, and for the dams industry we believe that the tools are out there to make their contribution: the choice to do so is a matter of will.