Occidental Petroleum has bagged exploration rights to Onshore Block 3, an onshore concession located in the Al Dhafra region in the UAE, from the Abu Dhabi National Oil Company (ADNOC) for a price of AED893m ($244m). 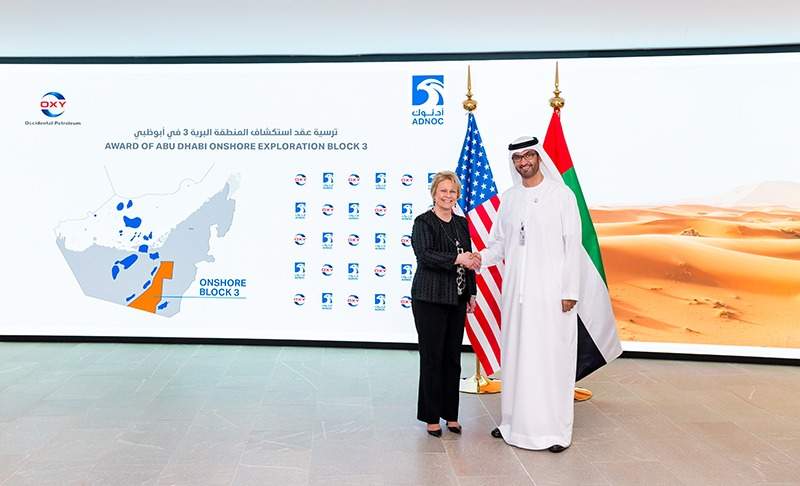 As per the agreement terms, Occidental Petroleum will hold a stake of 100% in the exploration phase of the onshore block. Its investment includes a participation fee, enabling the company to explore for oil and gas in the awarded concession, which is spread over an area of 5,782km2.

ADNOC said that a major part of the onshore block is already covered by existing 3D seismic data. Furthermore, the onshore block owing to its close location to the Shah, Asab, Haliba and Sahl fields, is believed to have very promising potential.

Abu Dhabi’s Supreme Petroleum Council (SPC) has endorsed the award given to the US oil and gas company, which was through a competitive bidding process. The concession agreement signed by the US company and ADNOC will be valid for a period of 35 years

ADNOC said that Onshore Block 3 is the first onshore block to be awarded among the geographical areas that were put up for the bidding process in last April.

ADNOC Group CEO Sultan Ahmed Al Jaber said: “Occidental is already a joint venture partner of ADNOC’s in the Shah onshore sour gas production and processing, and the award reflects our strategy to develop long-term partnerships with those who want to invest with us across our value chain.

“It remains at the core of our 2030 smart growth strategy to extract maximum value from Abu Dhabi’s resources, and secure robust and sustainable returns to the UAE.”

As per the concession agreement, Occidental Petroleum has the opportunity to develop and put into production any discoveries emerging from the onshore block. This will be after the company establishes that the discovered resources are of commercial value.

In such as case, ADNOC will have the option to hold a stake of 60% in the production phase of the onshore block.

Occidental Petroleum president and CEO Vicki Hollub said: “We are honored to partner with ADNOC to unlock Abu Dhabi’s vast untapped resources as part of its smart growth strategy. We have had a successful partnership with ADNOC developing the Shah Gas Field and look forward to continuing to work together on projects of strategic importance.”