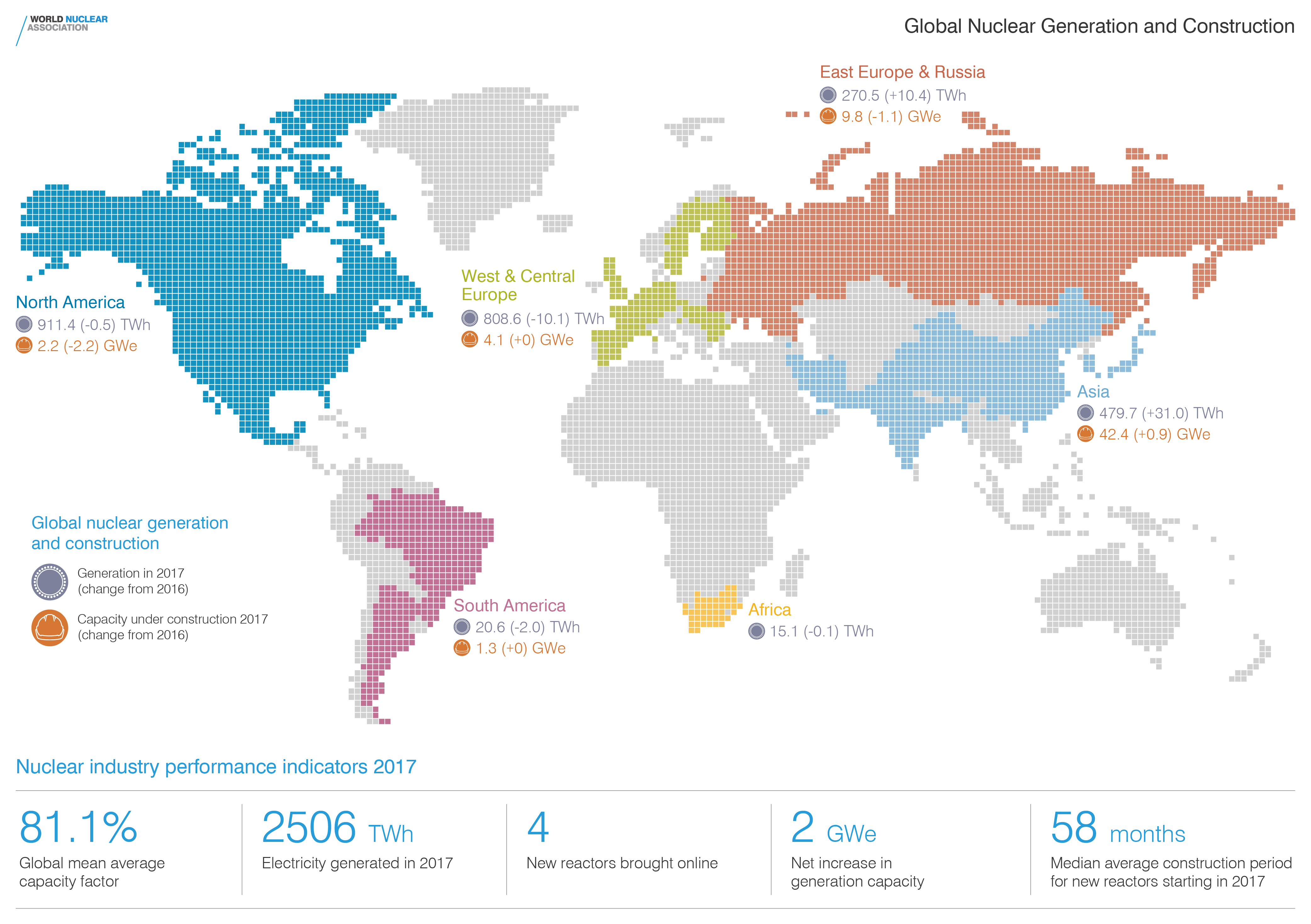 The global debate over the merits and dangers of nuclear power has been raging for more than half a century.

Critics such as Greenpeace insist that nuclear power generation is dangerous in terms of reactor safety – citing as evidence the disaster at Fukushima Daiichi in 2011 – and the storage of radioactive nuclear waste, prohibitively expensive, and that its contribution to limiting emissions of greenhouse gases (GHGs) is negligible compared with the potential of ever-cheaper renewables such as wind, solar PV and natural gas.

Advocates of nuclear power generation counter that it is a proven, reliable way of limiting climate change – nuclear power plants produce no CO2 emissions, the principal cause of global warming, as well as reducing reliance on fossil fuels – and produces inexpensive electricity thanks to the relatively low cost of uranium.

“There is no sustainable energy future without nuclear energy,” says Agneta Rising, director general of World Nuclear Association (WNA). “We will need all low-carbon energy sources to work together.”

It’s a view that appears to be borne out by the World Nuclear Performance Report, the WNA’s annual review of global nuclear reactor construction and operational performance.

The 2018 report reveals that worldwide nuclear generation in 2017 increased for the fifth successive year, reaching 2,506 TW/h, and now accounts for more than 10% of global electricity demand.

The report also features five case studies including how one of the oldest operating reactors achieved a 100% high availability factor, two reactor restarts in Japan, and the construction and operation of three new reactor models in Russia, South Korea and China.

In the last 20 years, the global average capacity factor was maintained at around 80%, irrespective of how long a reactor has been in operation, nor did reactor capacity factors decline in older facilities.

However, the WNA notes an increasing trend in some countries for nuclear reactors to operate in a load-following mode, whereby they adjust power output as demand for electricity fluctuates throughout the day, resulting in lower annual capacity factors.

Four reactors started supplying electricity in 2017, down from the ten that were added in each of the two preceding years. More than 25 reactors are due to come online in 2018 and 2019.

Overall, capacity additions for the period 2016-2020 are expected to reach the targets set by the nuclear industry’s Harmony programme, but the WNA report notes that build rates will have to increase significantly to achieve the overall goal of 1,000 GWe of new nuclear capacity by 2050.

A key goal of the Harmony programme is for nuclear generation to supply 25% of the world’s electricity at half-century.

At the beginning of 2018, China had 38 operable nuclear reactors, representing about 9% of the world’s nuclear capacity, and continues to dominate the new-build market, accounting for three of the four grid connections in 2017, and 18 of the 59 reactors under construction at the start of 2018.

During 2017, reactors were connected to the grid at Yangjiang, Fuqing and Tianwan, adding 3 GWe of capacity.

In 2017, construction commenced on the first nuclear power reactor in Bangladesh. The fifth Japanese reactor returned to service, and in South Korea a public vote lead to the resumption of construction of Shin-Kori 5. Construction was also completed on the first unit at Barakah, in the United Arab Emirates (UAE).

In addition, Rostov 4 and Leningrad II-1 were connected to the grid in February and March 2018, the first units to be connected in Russia since Novovoronezh II-1 in August 2016. In May, Russia also reached a significant milestone in the construction of its first floating nuclear power plant, Academik Lomonosov.

Turkey has become the latest country to start a new build programme. On-site construction at Akkuyu formally started in December 2017, and on the construction of the first reactor in April 2018.