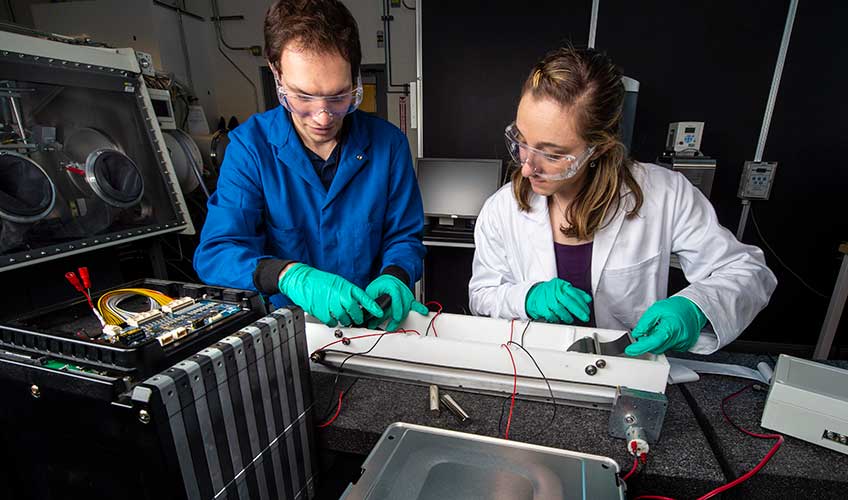 NREL materials characterization researcher Kae Fink pulls up her computer to display an image that looks a lot like one of those cereals that turns your milk various shades of the rainbow.

She explains that the colorful structures with tree-ring grains are actually images of materials in used lithium-ion (Li-ion) battery cells captured at the microscopic level. The lines that give the image depth are microcracks that appear as the battery ages. Every recharge, discharge, and use affects the structure of the materials and the lifetime of the battery, causing it to degrade until it is no longer useful.

Just as humans can’t escape the aging process, neither can batteries. However, NREL researchers are hoping to find a way to recover materials from these batteries even after their useful life is considered over.

The ability to recover the critical materials from spent Li-ion batteries could be the key to making electric vehicles (EV) more affordable—and, in essence, the key to getting more EVs on the road.

Today, Li-ion batteries are the main power source for the multitude of portable electronics like smart phones, laptops, and tablets that consumers consistently use, in addition to power tools and other personal, commercial, industrial, and military applications that are only growing in demand.

Global EV sales are expected to reach 30 million by 2030, up from 1.1 million in 2017.(1) Demand for global production of battery materials, such as lithium, cobalt, manganese, nickel, and graphite, is expected to grow to meet the demand. In fact, the growth in demand for Li-ion batteries for EVs could establish EVs as the largest end-user of cobalt and lithium. This presents a particular risk to the supply of these critical materials—a risk that has economic, environmental, and national security implications—and a risk that recovery and recycling could play a huge part in helping to address.

It turns out that taking a closer look at Li-ion cells could be the key to mass adoption of Li-ion recycling in the United States. Unlike lead-acid batteries, which are recycled at a rate of 99%, Li-ion batteries are recycled at a rate of less than 5%. The recovery rate of the critical materials in Li-ion batteries is even less. One way that NREL is working to increase this recycling rate is by using an established imaging tool—electron backscatter diffraction (EBSD)—for an innovative purpose.

“EBSD via scanning electron microscopy (SEM) is an established technique,” said Helio Moutinho, an NREL senior scientist who specializes in analytical microscopy. “But we at NREL are among the first to use it to analyze batteries at the microscopic level.”

The Li-ion batteries used in today’s products exhibit a number of different chemistries, which poses a unique challenge to effective and economical recycling. This variation in initial chemistry is compounded by variation in the way the battery is used throughout its lifetime, leading to significant diversity in the structure and chemistry of Li-ion materials when they reach their end of life. Unlike lead acid batteries, there may not be an optimal, one-size-fits-all method for recycling Li-ion batteries.

Using EBSD, in conjunction with SEM and energy dispersive X-ray spectroscopy, NREL researchers can clearly identify the structure, chemistry variations, grain orientations, and crack formations happening in Li-ion batteries at the end of their useful life. The research is intended to bridge the gap between fundamental science research and industry and could eventually be a useful tool for industry on a production line.

“The hope is that our technique will turn into a sorting diagnostic tool for future lithium-ion battery recycling efforts,” said Moutinho. “By taking a closer look, we could recommend different recycling methods based on what’s happening in each battery—and then repurpose the critical materials for a chance at a second useful life.”

The idea of designing to recycle is not new. It’s been around for decades. The circular economy framework is organized around the principles of designing out waste and repurposing waste for future use. By thinking about end-of-life issues up front, NREL researchers are working to reduce waste and mitigate critical material supply issues in the future.

NREL’s Maggie Mann contends that battery recycling could improve the manufacturing competitiveness of the U.S. in the global market.

The logistics of getting old Li-ion batteries safely out of people’s houses and EVs to recycling facilities still presents a major challenge, one that the U.S. Department of Energy (DOE) is hoping to tackle within a few years. DOE is awarding cash to innovators, entrepreneurs, businesses, researchers, universities, and scientists who propose the most promising solutions.

A man and woman set up a machine in a lab.NREL researchers Nate Sunderlin and Kae Fink assemble a relithiation reactor—a machine that makes it simpler and more energy-efficient to put lithium back into used Li-ion battery cathodes. The Lithium-Ion Battery Recycling Prize will support NREL’s important work to make battery recycling easier. Photo by Dennis Schroeder, NREL

In February, DOE launched the Lithium-Ion Battery Recycling Prize. It is a $5.5-million prize competition in three phases designed to spark innovation in developing methods to collect, sort, store, and transport spent and discarded Li-ion batteries in the United States safely and efficiently. The intent is to find concepts that can capture 90% of all Li-ion batteries nationwide for eventual recycling. Recovering the key materials in these batteries—most importantly, cobalt—could be crucial to keeping the country’s competitive edge in EVs as the demand for these vehicles increases.

“NREL’s supply chain analysis has shown that recycling could provide one-third of the cathode materials of lithium-ion batteries by 2025-2030,” said Ahmad Pesaran, NREL’s chief energy storage engineer. “Yet, American infrastructure for collecting and transporting lithium-ion batteries to recycling facilities is limited. Finding ways to collect significant amounts of these spent batteries could be key in helping to deploy novel recycling techniques nationwide.”

By casting a wide net, the prize seeks a range of imaginative ideas from everyone across all industries. The prize uses five different tracks, which are identified as the major barriers to widespread Li-ion battery recycling, and applicants have the option to apply to a single track or multiple tracks.

“We are looking for technical solutions and business solutions,” said Pesaran. “With this prize, there is room for everybody.”

The deadline to submit an idea for the Lithium-Ion Battery Recycling Prize is Aug. 1.

NREL’s multi-pronged approach—from analyzing batteries at the cellular level to administering a large-scale national prize—can help lead to effective and scalable Li-ion battery recycling efforts. The rainbow-colored, tree-ring-like images are reminders that sometimes answers to our most difficult challenges are not visible to the naked eye—but they are within our reach.