The Norwegian Petroleum Directorate (NPD) has identified a large area of sulphide minerals in the western part of the Norwegian Sea. 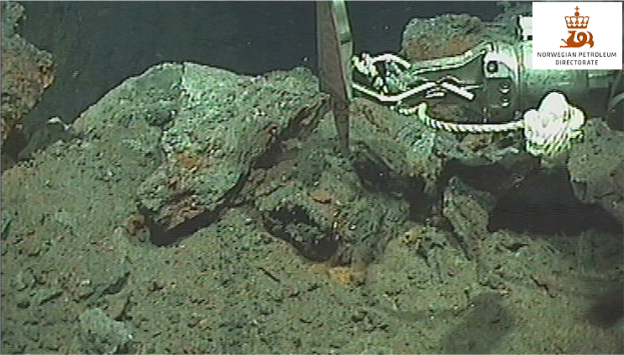 Image: The sulphide minerals as large fragments and gravel piles in the Norwegian Sea. Photo: courtesy of Norwegian Petroleum Directorate.

The objective of the expedition was to assess the potential existence of mineral resource deposits on the Norwegian continental shelf, as well as proving and mapping sea minerals.

NPD said that the new deep sea mineral deposits could include industrial metals such as copper, zinc, cobalt, nickel, vanadium, wolfram and silver.

As part of the expedition, the NPD used Swire Seabed’s Seabed Worker vessel to survey an area of 90kmx35km centrally located over the spreading ridge as well as Kongsberg Hugin autonomous underwater vehicle (AUV) to conduct mapping seabed in long corridors, totalling 750km.

NPD geologist Jan Stenløkk said: “Areas where these data indicated possible mineral deposits were examined using a remote operated vehicle, also known as an ROV, and large volumes of photo and video material were acquired. A number of mineral samples were also collected.”

The mineral deposits form after seawater, upon penetrating deep into the seabed, is heated to more than 400 degrees Celsius by underlying magma chambers and dissolves many minerals.

NPD said in a statement: “The warm seawater is flushed back out to the seabed through so-called “black smokers” where the minerals are precipitated in contact with the cold seawater.

“When the magma chambers shift due to the spreading between the plates, the flushing of the warm water stops, and the black smokers collapse and ultimately end up as piles of gravel on the seabed.”

The newly discovered area of sulphide minerals contains many piles of gravel and collapsed black smokers, including a 26m high, non-active tower, as well as some active systems.

NPD will analyze the mineral samples collected from the piles of gravel where as the mapping data collected by the AUV sensors will be processed and interpreted.

NPD exploration director Torgeir Stordal said: “It is gratifying that we have found a completely new deposit. We have also tested a number of measurement and mapping techniques that will be useful in future data acquisition expeditions.”