Northisle Copper and Gold has started drilling at its Pemberton Hills Property located on Vancouver Island, in British Columbia. 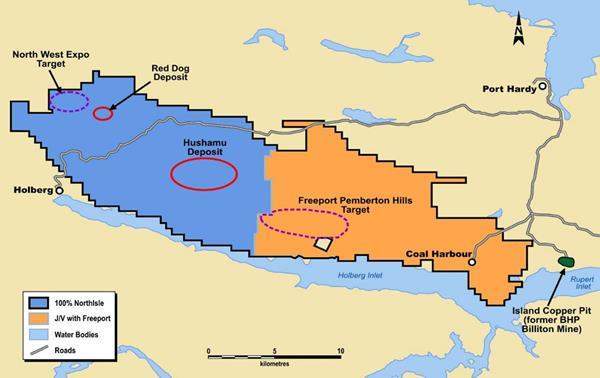 Northisle president and CEO John McClintock said: “We are excited to launch this first drill program on the Pemberton Hills target with the funding and technical support provided by Freeport. Furthermore, we are encouraged by Freeport’s decision to increase the initial drill program.

“The alteration at Pemberton is very similar to what we see at our Hushamu and Red Dog deposits and in porphyry copper systems found elsewhere in the world. We already have evidence of a buried porphyry copper deposit as demonstrated by anomalous porphyry copper mineralization found at the end of an historical hole drilled within the altered area.”

The Pemberton Hills target is a 3.5 kilometre by 1.5 kilometre area of advanced argillic alteration located within the same geological terrain that extends west-northwest from BHP Billiton’s past producing Island Copper Mine.

The presence of anomalous copper intersected at the end of an historical 200 metre deep drill hole, within the altered area, suggests evidence of a buried porphyry copper deposit.

Approximately ten kilometres of Induced Polarization (IP) geophysical survey has been completed and a further 5 kilometres remains to be completed.

A farm-out agreement was formed with Freeport earlier this year, dividing the initial property held by Northisle as illustrated in the figure above.

Under the terms of the agreement, as announced on February 26, 2018, Freeport may earn up to a 65% interest in the Pemberton Hills Property by funding a total of $23.9 million in exploration expenditures, while Northisle retains a 100% interest in its Hushamu and Red Dog copper-gold deposits and surrounding areas, for which a Preliminary Economic Assessment was published on September 13, 2017.