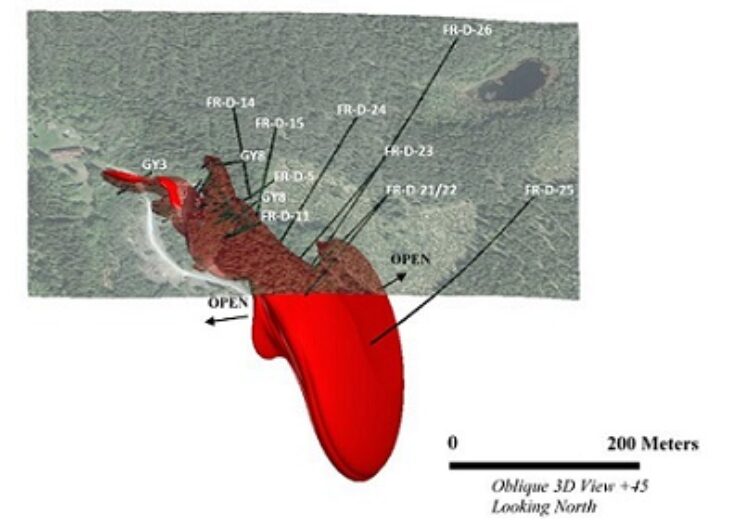 Oblique 3D interpretation of mineralization at Fredriksson Gruva. Note that the mineralization is interpreted to extend beyond the limits of historical drilling at depth and laterally. (Credit: CNW Group/Norden Crown Metals Corp.)

Norden Crown Metals is pleased to announce that it has obtained an exploration permit and an off road driving permit for the Fredriksson Gruva prospect and can now proceed with diamond drilling.  Norden Crown has identified a series of drill targets at Fredriksson Gruva where historical data demonstrates silver-lead-zinc mineralized zones form a moderately east plunging fold geometry that is open in all directions.  Test mining from an open pit where these zones reach the surface produced 21,000 tonnes grading 53 g/t silver, 5.13% zinc, and 1.7% lead1. Subsequent underground mining production down to 91 meters produced and additional 45,000 tonnes grading 49 g/t silver, 5.77% zinc, 1.84% lead.

“Fredriksson Gruva is a very intriguing prospect because historical mining only exploited ore from the top 100 meters, but a few historical holes demonstrate high grade silver-zinc-lead mineralization extends at least 400m below surface” stated Patricio Varas, Norden Crown’s. CEO,  “3D modelling based on the historical data suggests the mineralization forms an antiform or inclined saddle shape that plunges a significant distance.  The fact that there are no drill holes between the outliying intercepts and the mine workings excites the technical team as the mineralization remains open at depth and potentially along strike where continuity may not have been recognized by previous operators.  We are pleased to be in a position to drill this wide open prospect and feel we can leverage the critical mass of historical data.”

A detailed 3D geological modeling initiative was recently completed at Fredriksson Gruva utilizing historical drilling and surface data.  Geological modeling including lithology, structure and assay data demonstrates that silver-zinc-lead mineralization has an open fold geometry that plunges moderately southeast and extends from surface to approximately 400 meters depth.  Mineralization is defined over 120 meters and ranges between 3 and 10 meters in thickness as defined by the historical drilling data.  Norden Crown’s 3D modeling further supports that Fredriksson Gruva mineralization is open in all directions.

Norden Crown’s 3D modeling utilizes drill results that are historical in nature. Norden Crown has not undertaken any independent investigation of the sampling nor has it independently analyzed the results of the historical exploration work to verify the results. Norden Crown considers these historical drill results relevant as the Company will use this data as a guide to plan future exploration programs. The Company also considers the data to be reliable for these purposes, however, the Company’s future exploration work will include verification of the data through drilling.

Fredriksson Gruva was discovered in 1976 by LKAB Prospektering AB. Exploration was carried out in 1976 and 1977 including surface trenching, sampling and drilling of 9 diamond drill holes, which identified precious metal enriched base metal mineralization. In 1977, AB Statsgruvor (ABS) acquired the Fredrikssongruvan prospect and conducted open pit test mining in 1978.  Test mining was conducted to a depth of 20 meters below surface and produced 21,500 tonnes. A total of 11 additional holes were drilled in1979 to test the down plunge extent of mineralization. Between 1980 and 1981 mining activities resumed and an underground tram was installed. A total of 45,000 additional tonnes were produced from workings that extend to a depth of 91meters (4 underground levels). Also during this period, 4 holes were drilled and a core re-logging progam was completed. In addition, surface trenching and a magnetic geophysical survey was completed. Norden Crown staked the Fredriksson Gruva prospect as part of a larger staking acquisition (Gumsberg nr 9) in March, 2017. This licence is referred to as “Gumsberg West” and forms the western half of the highly prospective Gumsberg Project.