NHPC and BHEL have completed the 330MW Kishanganga Hydro-Electric Project (HEP) in the Indian state of Jammu and Kashmir with the commissioning of its third unit of 110MW capacity. 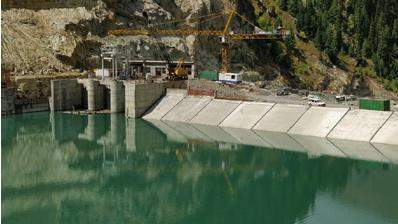 NHPC, in a statement, said: “The third unit (110MW) of the Kishanganga Hydroelectric Project (3 x 110MW) of NHPC at Bandipora, Jammu & Kashmir has been successfully synchronised with the grid and has also achieved its rated full load successfully at 23:58 Hrs on 30.03.2018.

“This marks the commissioning of all three units of Kishanganga Project, as the first and second units have already been commissioned on 13th March and 21st March 2018 respectively.”

BHEL, under a Rs4.95bn ($76m) contract given in 2010 from NHPC, was responsible for delivering electro-mechanical (E&M) package for the hydro power project. This included design, manufacture, supply, installation and commissioning of vertical shaft pelton turbines, in addition to matching synchronous generators, controls & monitoring (SCADA) system along with electrical and mechanical auxiliaries.

With the commissioning of the third unit of 110MW at Kishanganga, BHEL has taken its account of commissioned hydro sets to 33, having a combined capacity of 1,477MW.

A joint venture of Hindustan Construction (HCC) and Halcrow Group was given an engineering, procurement and construction contract (EPC) worth Rs27.26bn ($40m) for the project in 2009.

According to NHPC, the Kishanganga hydro power plant generates power due to the diversion of water of the river to an underground power house via a 23.25km long head race tunnel. Covered under Indus Waters Treaty signed by India and Pakistan, the hydro project will supply power to several states including 12% free power to its host state Jammu and Kashmir.