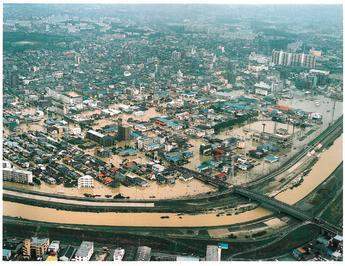 In 2004, 27 typhoons affected Japan, ten of them hitting many parts of the nation severely. In addition, seasonal rain-fronts brought about concentrated heavy rains in such regions. These natural phenomena had serious effects with extensive damage to people and socio-economy. In fact, last year wass considered to be the most disastrous year since modern meteorological observations began.

Japan is located on the eastern edge of Monsoon Asia and its climate varies according to seasonal and regional conditions, and is often affected by localised temporary downpours. The heavy rains typically occur during the rainy season from June to July and during the typhoon season from August to October. Topographically, most of the nation is mountainous and rivers are generally very short and steep. Therefore they tend to cause flash flooding with high concentrated peak discharge soon after intense rainfall. Socio-economically, Japan achieved rapid development during the latter half of the 20th Century, experiencing significant growth in the population and an increase in the gross domestic product (GDP). The majority of the population and highly valued assets are densely concentrated in downstream alluvial plains, which increases the vulnerability to flood disasters in such areas.

Due to these fundamental conditions, flood disaster mitigation had long been a matter of concern for the government. As such it has made tremendous efforts in preventing flood damages by, for example, constructing embankments and using floodways to change the course of rivers. In addition, Japan has developed unique knowledge and technologies to mitigate flood impacts, some old techniques are still just as effective today, such as using traditional groins to stand against flood flow. As well as this, Japan has also adopted adaptive lifestyles such as elevating the foundation of houses or supplying evacuation boats. Thanks to such efforts, metropolitan areas like Tokyo and Osaka have flourished and vast agricultural lands have been secured, successfully achieving the current national development and prosperity of today. At present, the Ministry of Land, Infrastructure and Transport (MLIT) is primarily responsible for flood and drought management policies, and directly manages the 109 main river systems (class A rivers), whose basins cover more than 70% of the nation’s land under the River Act (1896). The remaining rivers are managed by prefectural or municipal governments. Flood control projects include structural measures (embankments, flood control dams, flood diversion channels, and regulating reservoirs, etc) and non-structural measures (flood forecasting, flood early warnings, flood hazard maps, land use regulations, etc).

Due to population growth and socio-economic development in a short-term period, rapid urbanisation occurred in many parts of Japan, particularly in the metropolitan areas of Tokyo, Osaka and Nagoya. A series of large-scale development projects that were conducted in the alluvial plains downstream of the river resulted in a high concentration of population and properties. Thus the urbanised alluvial plains have become much more vulnerable to flood disasters, and therefore the increased risk of urban flood disasters occurring has become a serious concern. In the Tsurumi river basin in the greater Tokyo region, for example, farmland and forests, which accounted for 90% of the total basin in 1958, decreased significantly to about 15% in 2000 due to land development and urbanisation. If such land had been preserved, most of the rainwater would have infiltrated into the ground or would have been retained on the surface, and therefore rainwater runoff in the downstream areas would not be as aggravated. However, once the surface was covered with asphalt and concrete for the sake of development, it began to prevent natural infiltration of rainwater into the ground. Consequently, rainwater rushes into the river in a shorter time and in a greater quantity.

To mitigate these urban flood disasters under such situations, the Government of Japan started undertaking an integrated flood management programme in 1979 at the national level: the comprehensive flood disaster management of urbanised river basins (CFDMURB), which includes not only river improvement projects to secure sufficient capacity for floodwaters but also basin improvement measures and damage mitigation measures to mitigate flood damages in the basin. Since the introduction of the CFDMURB, urban flood mitigation measures have been promoted through designing basin management plans and organising basin councils involving the sectors concerned

The Tsurumi river flows in the southern part of the Tokyo metropolitan area. Because of its favourable location for commuting to the central district of Tokyo, this river basin experienced rapid urbanisation in the 1960’s – natural forests have been changed into the housing and roads covered by concrete or asphalt. This change led to an increase in the amount of surface runoff flowing into the Tsurumi river, and flood disasters have become much more serious as a consequence. Therefore the CFDMURB has been applied to manage the river and its whole basin in an integrated manner.

The Tsurumi multi-purpose retarding basin project has been implemented as one of the pillar river improvement projects under the program of the CFDMURB. Commenced in 2003, it aims to prevent flood disasters in downstream areas as well as create multi-purpose spaces for recreation and sports.

This retarding basin is separated by an overflow-type levee and separation levees from the river itself, and is encompassed by a surrounding embankment. By excavating its interior, it can hold a maximum of 3.9Mm3 of floodwater. The overflow-type levees are constructed three metres lower than the embankment and allow floodwaters to flow inside. Aiming at reducing the flood peak discharge by 200m3 /sec, which is the estimated immediate targeted flow magnitude (once in 10-year scale), this retarding basin prevents flood damages in downstream areas. The International Stadium Yokohama and the Yokohama Comprehensive Care Continuum are located inside the retarding basin. The Stadium is the largest sports stadium in Japan with a capacity of 70,000 and well known for the final game of the 2002 World Cup Soccer Tournament. This stadium utilises the piloti method (elevated-floor) to prevent inundation even if floodwaters flow into the retarding basin.

In 2004, when Typhoon no. 22 struck the area in October, the basin functioned effectively to decrease flood peak discharge and reduce damages.

Under the framework of the CFDMURB, not only the river managers but also local governments and private land developers are encouraged to make basin improvement measures effective. One of the most important structural measures is rainwater detention ponds or reservoirs, which are situated in various parts of the basin in order to temporarily store rainwater and to control their immediate outflow into the river. At the same time, these facilities are utilised as multi-purpose recreation areas or sports facilities after the floodwater is cleared. Other measures include:

• Putting rainwater storage functions on facilities with other purposes, such as school grounds or parks.

• Constructing a permeable pavement which facilitates the infiltration of rainwater into the ground.

In 1981, rainwater run-off control facilities were installed experimentally in the western part of Tokyo as part of a public housing development project. In these facilities, rainwater is collected from roofs, and stored in containers and trenches, and finally infiltrated into the ground. They are effective not only in reducing rainwater runoff but also in enhancing groundwater recharge, and consequently in preventing land subsidence as well as mitigating heat-island phenomena, which are typically observed in extremely urbanised areas. In 2001, a professional research team examined these rainwater run-off control facilities and found that they were still very effective, with no major clogging problems even 20 years after their installations.

Besides structural measures, non-structural measures are also important to mitigate flood disasters. These measures include publicising flood hazard maps and establishing flood forecasting and early warning systems. By incorporating the simulated inundation areas and evacuation information, flood hazard maps enhance people’s preparedness and their capability to cope with flood disasters, and they also facilitate smooth evacuations in the case of emergencies. Flood forecasting and early warning systems have been developed by involving relevant organisations, such as meteorological sectors and the media, and now they make a significant contribution to reducing flood damages and facilitating people’s early evacuation.

Although these measures focused on the urbanised river basins at first, they are now applied to all the class A rivers in the country after the revision of the Flood Fighting Act (2001). MLIT has developed such measures in cooperation with the Japan Meteorological Agency, and now flood information is widely distributed through the internet and mobile phones.

Recently, the population growth and socio-economic development seem to have slowed down as a whole. However, flood management in urbanised areas is still of great concern because of the increasing number of urban flood disasters occurring due to localised torrential rainstorms, the increasing flood damage potential caused by excessive concentration of population and properties, and the increasing impact of floods on the urban socio-economic functions.

In addition, it is necessary to deal with new types of flood disasters such as the inundation of underground space. Therefore, steady progress of urban flood management has been recognised, resulting in the establishment of the Designated Urban River Inundation Prevention Act in May 2004. This act requires the following procedures for designated urban rivers and their basins:

• Preventive measures against the increased rainwater runoff should be carried out in advance of the development projects in the basins.

• The existing flood regulating reservoirs should be conserved.

• Residents should make efforts to promote rainwater storage and infiltration.

While river managers have made great efforts to develop flood disaster mitigation measures as well as secure sound riverine environment, they are still requested to respond to the diversified needs of the local residents, some of which are severely conflicting. Thus, a series of discussions began in 1999 on the Tsurumi river by the assembling of relevant sectors and communities in the basin.

These discussions comprised of 20 specialists, over 80 basin residents and over 70 administrative management sections representatives, including the sections of sewage, city planning, agriculture, environment and education. Over 100 people in the basin met together at each of the seven official plenary meetings, and tried to form a basic consensus on the future image of the river and its basin. As well as these plenary meetings, a number of regional, technical, and thematic sub-meetings were held through participatory processes.

In 2004, general terms were agreed upon and a Tsurumi river basin management plan was established. Based on a bottom-up approach, this plan identified the goals of five target areas: flood control, normal flow management, natural environment, emergencies, and river recreation.

These goals were aggregated into a single catchphrase to highlight the fundamental objective of the plan: ‘Vision of restoring the Tsurumi River Basin by connecting our lives and lifestyles to Earth’. The Committee also recommended several actions to fulfil these goals beyond the legislative and administrative framework.

Urban flood disaster management has long been a prioritised issue to undertake and the Public Works Research Institute (PWRI) has provided the base of technical knowledge in this field in collaboration with the Government of Japan. Now PWRI is planning to establish a new international centre on water related hazard and its risk management, which conducts research, capacity building and information networking. By using this framework, PWRI will promote research and development activities, and try to disseminate new findings and research outcomes to be used for further flood disaster mitigation.

The author would like to thank the Ministry of Land, Infrastructure and Transport (MLIT), Kanto Regional Development Bureau of MLIT, Keihin Work Office of MLIT, Infrastructure Development Institute (IDI), Association for Rainwater Storage and Infiltration Technology (ARSIT) and Tokai University for their valuable comments and suggestions as well as for provision of the useful photos and figures for this paper.