Workers at Fukushima Daiichi have sampled and surveyed the unit 1 and unit 2 torus rooms and vent pipes that lead from the primary containment vessel to the torus. 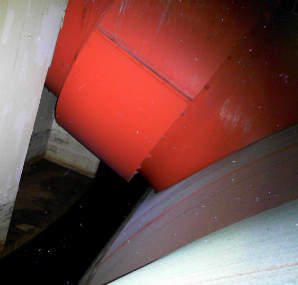 The purpose of the torus is to reduce the pressure building up in reactor vessel and primary containment vessel as a result of the reaction of zirconium-air reaction in a core uncovery accident, such as what happened at Fukushima. In theory, the water-filled torus would quench the generated steam, diminishing the build-up of air pressure.

Workers took photographs and samples of the flooded unit 1 torus room in late February. From a camera lowered into the room from above, they determined that the depth of the accumulated water is 4.9m, and that although internal structures were rusty, no major damage was immediately identified. Two samples of water were collected at different heights (near the water surface, and around the bottom) using a special water sampler. They also used an ATOX collector to gather sediment as well. That operation was in cooperation with ATOX and Chubu Electric Power Co. Chemical analysis of the samples might help indicate the condition of the core, and could also be used to help find the source of radioactive water leaks.

A total of eight vent pipes feed the torus from the PCV. In unit 2, TEPCO and contractors have investigated three of the eastern pipes in March, after the first such investigation of another in December. A quadrapedal walking robot was used to take dose measurements and photographs. No flowing water indicating leaks was found around any of the four pipes or their surrounding concrete penetrations.

An effort to use travelling in-core probe penetrations to directly measure the temperature of the unit 2 reactor pressure vessel has come to an impasse. Four lines lead from the TIP room near the reactor down through an indexing device in the primary containment vessel to penetrations at the bottom of the unit 2 reactor. A cable reel was developd to manually feed a 6mm-diameter endoscope into the TIP lines. Isolation valves and a nitrogen gas injection system was designed to prevent radioactive RPV air leaking down the line. The farthest distance reached was about 9m, to the indexing device, in one of the lines, where the endoscope appears to be blocked by part of the indexing device. Endoscopes inserted into the other three lines were blocked by what appears to be debris. Engineers will consider how to overcome these potential obstacles.

A large civil engineering project to deflect groundwater from the contaminated ground of the Fukushima Daiichi power station is nearing completion and is expected to start up next month. Because the power station was built between headlands and the sea, water naturally flows downward toward it from the hills behind. The problem is that when this groundwater reaches the Daiichi station it becomes contaminated, and then must be treated. A new system of twelve 10m3/hr pumps upstream of the reactors will move the groundwater water to a series of nine 1000m3 temporary storage tanks for radiological monitoring before being pumped into the sea (caesium-137 discharge limit: 1Bq/L). As of 28 February, water quality testing was still underway for seven wells. Three pumping lines are planned, each of which will run in a three-day sequence, filling the tanks, pausing a day-long water quality analysis, and then emptying the tanks. To prevent contaminated water flowing out of the flooded basements of the Fukushima Daiichi units, workers will ensure that the accumulated groundwater (measured in site sub-drains) remains higher than the flooded water level.