The Tennessee Valley Authority and Babcock & Wilcox have signed a contract formalizing the process to prepare a license application to build a B&W mPower small modular reactor at TVA's Clinch River site in Oak Ridge, Tennessee. 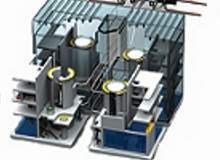 Supported by a US Department of Energy, which will pay up to half of the mPower design and licensing costs, the firms aim to build a commercial demonstration plant at Clinch River by by 2022.

The contract, signed 7 February 2013, defines the scope of licensing work and responsibilities for TVA and B&W, including geological characterization of the Clinch River site, a preliminary safety analysis report, and site environmental report.

"Work under this contract will commence at the Clinch River Site once B&W mPower and the US Department of Energy sign a cooperative agreement for the grant funds," TVA said in a statement. The DOE program would provide $452 million in funding over five years and has so-far received more than $67 million in appropriations from Congress.

TVA says that it is "evaluating" the Clinch River site for potential deployment of "up to four" B&W SMRs. Some site characterization work is already underway, and TVA expects to submit a licence application to the Nuclear Regulatory Commission in 2015.

B&W’s mPower reactor is an integral 180 MW pressurized water reactor. It will be mostly constructed in factories and shipped by rail to the plant site, resulting in reduced construction time and more standardization.

Commenting on the deal, James Ferland, President and Chief Executive Officer of B&W said, "This Construction Permit contract with TVA is evidence of real and definitive progress toward our goal of completing the first commercial deployment of an SMR in the United States by 2022."