TEPCO is setting up a new internal company for Fukushima Daiichi decommissioning, and dealing with contaminated water. 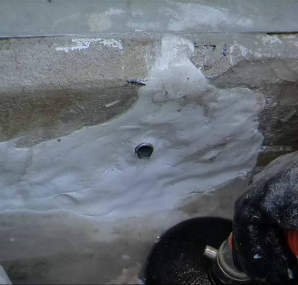 TEPCO is setting up a new internal company for Fukushima Daiichi decommissioning, and contaminated water.

[Picture: a sealed leak at the Fukushima Daiichi tank farm]

TEPCO said that this organization ‘will clarify the framework of responsibility and work intensively’ on these measures. It will also have responsibility for using Fukushima 5&6 for decommissioning training work, after TEPCO announced plans to shut them in December.
The internal company’s president — Naohiro Masuda, a former TEPCO executive, has been proposed — will function as chief decommissioning officer for these issues, ‘so that he may swiftly and flexibly respond to the various tasks arising from the site.’

The company appears to be set up to help improve operational transparency and interaction with external bodies. A press release said, "Long term decommissioning work and contaminated water measures require a framework that is suited to a project at the national level, and we will discuss the development of a concrete organizational framework and business management structure based on this fact." It also said that the company structure would be devised in such a way that both internal and external experts would be involved. In addition, vendors’ nuclear division directors will be invited to serve as vice presidents. The new company will work with Japan’s new International Research Institute for Nuclear Decommissioning.

The company is due to be set up by April 2014.
Other tasks include:

Four further leaks have been found, and sealed, December 21-22 at the Fukushima Daiichi tank farm site. There is no indication that the leaks were of contaminated water.

The initial leaks found were in dikes that prevent surface water from running off into groundwater. The leaks were initially collected in temporary ponds made with sandbags and plastic sheeting, and then pumped back into the dike system. Later, repairs to the concrete dike structure were made with waterproof sealing agent.

In other news, Toshiba has published a tender for full-scale reactor fabrications to help with the Fukushima Daiichi decontamination & decommissioning project. In the document, Toshiba said that the reactor fuel is expected to have melted and leaked out of the reactor pressure vessel into the containment vessel (PCV), which is now flooded with water. To safely remove melted fuel, water vent pipes will be stopped up. Toshiba has published a tender for a full-scale reactor containment vessel vent pipe to test this method.