Representatives of Alcoa Power Generating Inc (APGI) have signed an agreement with over 20 environmental and regulatory bodies, which will play a key role in the relicensing of the Tapoco hydro power project in Tennessee and North Carolina, US. 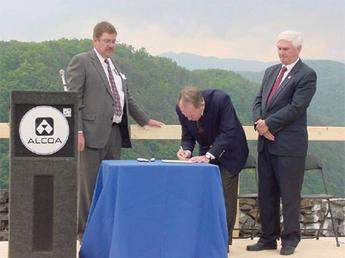 With APGI’s existing licence set to expire in February 2005, the new agreement has been developed to shore up support amongst federal and state agencies, local communities and environmental groups for continued generation at four hydro power plants in exchange for guarantees that over 4000ha of land are to be preserved.

Discussions on the relicensing of the Chilhowee, Calderwood, Cheoah and Santeetlah hydro plants began seven years ago, with legislation allowing the Federal Energy Regulatory Commission to approve the agreement introduced last month. The legislation was then presented to the Committee on Energy and Natural Resources Subcommittee on National Parks in a hearing on 27 April.

The agreement signed this week calls for increasing flows into the Cheoah river, the establishment of a conservation fund and the construction of new recreation facilities in North Carolina.

The deal will also see the Great Smoky Mountains National Park transfer 40ha of land submerged under Calderwood Lake to APGI in exchange for 75ha of land that is already within the park’s boundaries. It also involves provisions for The Nature Conservancy, which will have the option of purchasing over 2300ha of land from APGI and selling it on to the National Park Service, the US Forest Service or Tennessee Wildlife Resources to assure its preservation.

If Congress approves the measures listed in the agreement, APGI will also grant The Nature Conservancy a 40-year term easement for 1600ha of land and provide US$100,000 of funding a year for resource stewardship in Tennessee.