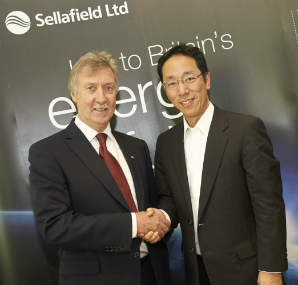 The ‘operator to operator’ co-operation agreement will see the two companies share knowledge, experience and skills on an on-going basis. This is the first time that any UK nuclear site operator has signed such an agreement with an international customer, according to Copeland member of Parliament Jamie Reed, who posted news on his website on 29 April.

The agreement will allow UK small businesses in the Sellafield supply chain opportunities to work at Fukushima. In addition, clean-up and safety experts will visit each others’ sites regularly to share information, according to a statement from the UK’s Department for Energy and Climate Change.

Sellafield Ltd managing director Tony Price said, "We serve similar local communities and I know that the one thing the Japanese are keen to mirror is the way in which we work with our local community to inform them about the work we do in an open, transparent and proactive manner. We’ve already sent a delegation to Japan to talk to them about how we work in partnership with our local stakeholders."

Masuda said, "We are now three years into the decommissioning of Fukushima Daiichi, and while we have made good progress our biggest challenge has been in shifting the mindset from power generation to decommissioning – working with Sellafield Ltd, who are several years ahead of us in terms of decommissioning, will help us to move forward more quickly.

We also have some wisdom that we can share, we’ve made some good progress over the last three years and we look forward to working closely with Tony and his team at Sellafield."

Sellafield’s relationship with the Japanese goes back as far as the 1960s. BNFL worked closely with Japanese colleagues, supplying Magnox fuel and technical support for its 160 MW Tokai Japco reactor that began operation in 1965. Early spent Magnox fuel from Japanese reactors was sent to Sellafield for reprocessing in the Magnox reprocessing plant. Later the Japanese played a pivotal role in supporting the UK’s nuclear industry and helping to finance the Thorp plant, for nearly 20 years reprocessed spent fuel from Japan and other plants around the world.

The announcement comes as part of a state visit to the UK by Japanese prime minister Naoto Kan, which had several other nuclear aspects. UK’s ONR met with the Japanese regulator in September 2013.

Two annual conferences, the UK-Japan Nuclear Dialogue, organized by the UK Foreign & Commonwealth Office, were held in 2012 and 2013. Those meetings lead to the establishment of working groups in decommissioning, sharing approaches on stakeholder engagement.

After the state visit, the UK government announced it was establishing a UK-Japan civil nuclear joint research fund and a working group on nuclear energy research.

"Together, we believe that nuclear energy provides a consistent and affordable source of energy, and has a key role to play in the future low carbon energy mix," the UK government said.