Unit 3 of Russia's Rostov nuclear plant is undergoing final acceptance tests in preparation for commercial operation. But the startup of other units may be delayed. 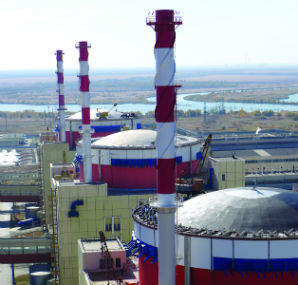 Unit 3 of Russia’s Rostov nuclear plant is undergoing final acceptance tests in preparation for commercial operation. But the startup of other units may be delayed.

Russian state nuclear corporation Rosatom said the results of the tests as well as other documentation and the results of audits conducted during Rostov 3 pilot operation, will be sent to nuclear regulator Rostechnadzor for approval.

Rostov 3 was connected to the grid last December 2014 and reached full power in July 2015. Two units are operating at the plant while construction continues on Rostov 4. All four units have VVER-1000/320 reactors. Unit 4 is expected to start operation in 2017.

Concreting of the containment dome began at Rostov 4 in July, which also saw delivery by OMZ of the fourth and final accumulator tank of the emergency core cooling system. The reactor pressure vessel for the unit was delivered to the site in June.

Progress was also reported at unit 1 of Novovoronezh phase two (II) with the start of comprehensive trials of safety systems, in preparation for cold and hot trials of the reactor. Production of chemically desalinated water for unit 1 started in July, using reverse osmosis plants. Novovoronezh II is the lead project for deployment of the AES-2006 design incorporating a Gidropress-designed pressurised water reactor, an evolutionary development of the VVER-1000. Construction of Novovoronezh II units 1 and 2 began in June 2008 and July 2009, respectively.

Rosatom Director General Sergei Kiriyenko said that, although first criticality is planned for December, Rosatom is not obliged to meet this deadline "at any price." However, he stressed that the necessary funding is available to complete the plant on time."

In late July, the supervisory board of the Market Council, a non-commercial partnership, which supervises Russia’s wholesale electricity market, approved rescheduled the dates for commissioning new reactors. It also gave dates for the start of their obligations under power supply contracts (PSCs).

Kiriyenko explained that the changes were the result of falling electricity demand in face Russia’s current economic difficulties arising from sanctions. However, forward planning continues. Nuclear utility Rosenergoatom said in July it had completed project documentation for two units to be built at the Kursk II nuclear plant and was preparing the construction licence application. Commercial operation of the plant’s two VVER-TOI units is planned for 2020 and 2021, respectively. Site preparation for the new station is already under way and road access works have begun. Commissioning of Kursk II is to be synchronized with decommissioning of the existing NPP units.