Uranium production will remain at the level of 3000t (tU) at the enterprises of Russian Holding Atomredmetzoloto (ARMZ), according to ARMZ Director General Vladimir Verkhovtsev. 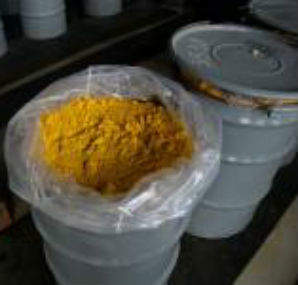 Uranium production will remain at the level of 3000t (tU) at the enterprises of Russian Holding Atomredmetzoloto (ARMZ), according to ARMZ Director General Vladimir Verkhovtsev.

"We mine as much uranium as the country needs, with the economics laid as the base: we downsize production where uranium is expensive and raise production where it is cheap," he told Nuclear.Ru. He said ARMZ is focusing on the Dalur and Khiagda mines where mining costs are relatively low. "For instance, we could increase capacities on the Khiagda site to 2000tU but we are planning to reach 1000tU by 2018," Verkhovtsev said, explaining that "it is not profitable in the current economic situation" and it is better to mine only that which has been contracted.

Meanwhile efforts to increase efficiency at ARMZ’s Priargunsky Industrial Mining and Chemical Union (PIMCU) are having an effect. ARMZ hopes to reduce losses at PIMCU to RUB1.5-1.8bn ($21.9m), Verkhovtsev told journalists at the 40th Symposium of the World Nuclear Association (WNA) in London. In 2014, PIMCU’s net loss was about RUB3.5bn. Now the company expects to break even in 2016. He said the exchange rate was a key factor facilitating this as contracts for uranium delivery are signed in dollars. He also noted that in the holding overall net profit is expected to increase. Last year, ARMZ received a net profit at RUB234.2m.

Capital costs for construction of PIMCU’s Mine No 6 will be less than $500m, while the production cost will be less than $90 per kilogram of U3O8, according to Marina Liborakina, ARMZ’s deputy director general for strategy and business development. She told the WNA Symposium that the resources of the mine are estimated at 40,900tU and that the uranium content in ore is about 0.3%, double that of PIMCU’s currently operating mines. Design capacity of the mine is ta1800tU a year. Planned average production volume is 1200tU and construction is planned to start in 2016, with commissioning in 2022.

Photo: Yellow cake produced from the Dalur mine (Credit: ARMZ)