Releases and runners for Glen Canyon

Scientists in Arizona, US are to carry out experimental water releases from the Colorado river's Glen Canyon dam to try to save the endangered humpback chub, a species native to the Grand Canyon. 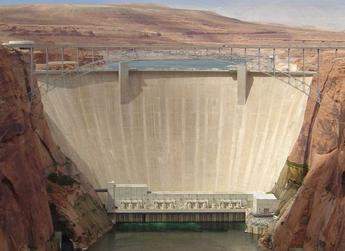 From January to March, the US Bureau of Reclamation (USBR) is to bring about high fluctuating releases, ranging from 140-560m3/sec in attempts to control the impact of non-native trout species, which are thought to act as predators of the chub and competitors for the same limited habitat space.

‘Scientists are trying to determine if the fluctuating flows can keep the trout population in check by impacting their spawning and other aspects of their lifecycle’ said USBR, which carried out a similar experiment in the same period last year.

While the main aim of the releases is the protection of the humpback chub, the experiment is also intended to help out fish in other parts of the river. ‘The flows are anticipated to benefit the trout upstream in the [25.7km] stretch from the dam to Lee Ferry’added USBR, ‘by reducing the overpopulation of trout, thus increasing the viability and size of the fish’.
Separately USBR has awarded a US$25.2M contract to Alstom’s North American hydro unit in Denver for the supply and installation of eight 169MW Francis turbine runners to the dam. The first of the turbine runners is to be manufactured towards the end of this year, with installation of the eight units scheduled for 2005-2013. According to Alstom, scope of supply is also to cover wicket gates and stationary wear rings.