PPL Montana officially dedicated a new 60MW powerhouse this month at its Rainbow Dam hydroelectric facility near Great Falls in Montana, US. 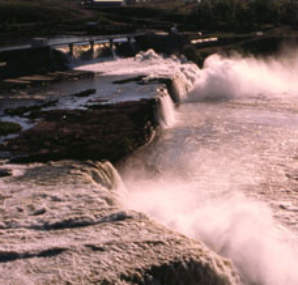 PPL Montana officially dedicated a new 60MW powerhouse this month at its Rainbow Dam hydroelectric facility near Great Falls in Montana, US.

The ceremony on 10 July, which drew a host of state and local officials, celebrated completion of a $245M redevelopment project.

The new facility replaces a century-old powerhouse and boosts Rainbow’s generating capacity by 70%.

“One hundred and thirty years after Great Falls was founded on a vision that its waterfalls could power industry and progress, we remain inspired by the falls and by the power and potential energy of the Missouri River," said Pete Simonich, vice president and Chief Operating Officer of PPL Montana.

“With just one unit, the new state-of-the-art powerhouse can generate about 70 percent more power than the old powerhouse’s eight units combined," he said. "And it can produce enough clean, renewable electricity to power 45,000 homes."

Construction of the new facility began in October 2009 and was completed earlier this year. The project required the removal of more than 500,000 tons of earth and rock. More than 50,000 cubic yards of concrete were poured, and 7 million pounds of rebar went into the new powerhouse.

“As projects like Rainbow demonstrate, hydropower continues to offer promise and potential," said Simonich. "Modernization and upgrades to existing facilities offer an opportunity to increase capacity without the need for construction of new, large dams."

The project created more than 200 construction jobs, relied heavily on Montana subcontractors and gave the local economy a boost. Incentives made available through the American Recovery and Reinvestment Act of 2009 helped make the project possible.

PPL Montana’s Rainbow Dam, which began operation in 1910, is 1055ft long and 29ft high. The new powerhouse sits about 2500ft downstream from the dam and 200ft from the old powerhouse. Water flows down a 2500ft power canal and through a 25ft diameter penstock to the new turbine generator. The turbine’s slower rotation, wider flow passages and fewer rotating surfaces make it easier for fish to pass through unharmed.