Metropolis to restart after 16-month outage

Following an outage lasting 16 months, the Metropolis, Illinois uranium conversion plant has been given clearance to restart operations. 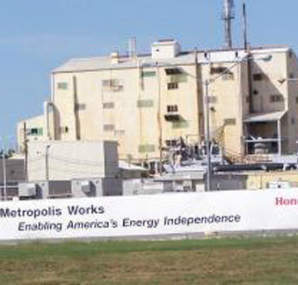 Following an outage lasting 16 months, the Metropolis, Illinois uranium conversion plant has been given clearance to restart operations.

In May 2012 metropolis shut down for planned maintenance; four months later, following a general post-Fukushima inspection by the US regulator, operator Honeywell announced that the plant, which converts natural uranium into uranium hexafluoride for enrichment, would remain shut until upgrades had been carried out. The uranium hexafluoride is sold exclusively by ConverDyn, a joint venture of Honeywell and General Atomics.

Honeywell said in 2012 that it had started an integrated safety analysis programme before Fukushima as part of its licensing process. That progoramme identified upgrades to make the facility more resistant to earthquakes, including seismic hardening of buildings and piping.

The precise work required was outlined in an October 2012 order from the US regulator.

Since then, work has been carried out. In April, ConverDyn announced the retirement of president ant chief executive officer Ganpat Mani, who spent 17 years at ConverDyn and 35 at Honeywell. He was succeeded by Malcolm Critchley, formerly vice president, Asia marketing and sales.

In June, the US regulator allowed the plant to begin limited operations, but the new clearance will allow it to ramp up to full production.

Honeywell has not yet stated when it plans to start up production.