Simon Jones takes a look at some recent developments in hydro power in Switzerland and Austria. 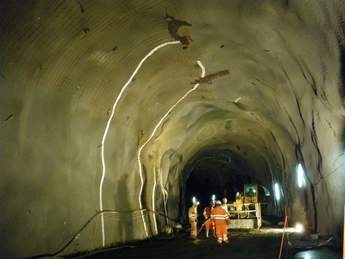 THE ALPS WERE THE cradle of modern hydro production in Europe. The plants installed in the 900km arc of mountain ranges from the French Mediterranean coast to eastern Austria helped power Europe’s industrial expansion. Today the pan-European demand for peak and balancing energy, triggered by market liberalisation and the growth of renewables, has brought fresh impetus to Alpine hydro. In Switzerland – where hydro already generates over half the 66,000GWh annual output – work has just begun on the 660MW Nant de Drance underground pumped storage power station, while Austria has announced ambitious plans to expand its hydro sector.

With 105 hydro plants producing 10BkWh/year, the Alpine canton of Valais generates 30% of national output. The first Valais concession dates back to 1891, while a second wave of expansion from the 1950s-70s saw the completion of landmark projects such as Grand Dixence, Mauvoisin, Mattmark and the two Emosson dams that will serve Nant de Drance. Modern Valais plants include Cleuson-Dixence, built by Alpiq and Dixence in the ‘90s, which can feed the capacity of a nuclear plant into Swissgrid’s high-voltage network within three minutes. The underground station’s 1200MW Bieudron power plant – offline since December 2000 following an accident – features the world’s most powerful Pelton turbine.

The Federal Environment Ministry licensed the EUR650M (US$9.3M) Nant de Drance project in August 2008. Located between the towns of Martigny and Chamonix in Valais, Nant is a joint venture between Swiss utility Alpiq (54%), Federal Swiss Railways SBB (36%) and municipal utility FMW (10%). The Valais power supplier joined the consortium in June 2009, using its powers under a local water law to invest in any new hydro concessions within the canton.

Atel (forerunner of Alpiq) and SBB first applied to licence Nant in summer 2006. Then the cost estimate was a more modest EUR500M (US$695M). SBB came close to abandoning the project as raw material and construction costs soared over the next 18 months. One condition of the build and operate deal creating the Nant de Drance company, agreed in November 2008 between the then joint partners, was the need to rein in building and engineering costs before work began.

The plant is scheduled to come on-line in stages from 2015, with a maximum 1500GWh annual output of peak load electricity – enough to cover demand from 600,000 homes. The 380kV grid running from Chatelard through the Rhone valley will also be modernised and extended ahead of Nant’s completion, although this project has met with resistance from local residents’ groups.

The contract for construction work on Nant went to Groupement Marti Implenia (GMI). The powerhouse will be built almost entirely underground in a cavern between two existing reservoirs, Emosson (1930m altitude) and Vieux Emosson (2205m altitude), on land belonging to the Valais border municipality Finhaut. A 5.6km long gallery will access the cavern at 1700m altitude in the Lower Valais.

Nant de Drance will be Switzerland’s first ever variable speed pump storage plant, covering growing demand for peak supplies on the national grid and compensating for irregular supplies of renewable energy. Expansion of Switzerland’s pumped storage sector through Nant and other projects will support the feeding of new wind, solar and other renewable supplies into the national and European network. Valais already hosts Switzerland’s biggest wind parks at Collonges and Martigny. “Security of supply does not only mean producing enough,” says Alpiq CEO Giovanni Leonardi. “It also involves generating power at competitive prices and from non-polluting sources.” The head of Nant’s lead investor argues pumped storage “is a vital element in supply security. It helps iron out peaks in demand, it contributes to network stability and it delivers environmental benefits.”

Walter Steinmann, Director of the Federal Department of Energy, also underlines this new role for Switzerland’s rich hydro resources. “For decades it seemed that the development of our hydro sector had reached its limits, with priority given to other less capital-intensive forms of production,” he argues. “Now we are seeing a renaissance of hydro power, thanks to the demand for green electricity and for the balancing power that can be sourced from our reservoirs. And this function will continue to grow alongside the rise of wind and photovoltaic capacity with their fluctuating output.”

Steinmann sees Nant as “a symbol of Swiss hydro’s revival and a pioneer of collaboration between traditional power utilities and the public transport sector.” SBB’s jv with Alpiq is indeed the first such direct investment by a major customer in Swiss hydro capacity. Nant will improve supply security for the railway operator’s network and several private train companies that it supplies. SBB already faces sharp load peaks, especially in the morning when much of its locomotive stock comes into service at the same time. It projects a 65% jump in railway demand for such peak energy over the next 20 years. New lines and improved services threaten to outstrip current supply by 2015. “In Switzerland seven of every 10 trains run on hydro power, a figure unmatched anywhere in the world,” says SBB boss Andreas Mayer. Powering expansion of Switzerland’s train services is another indirect environmental gain from Nant de Drance.

The project developers stress the minimal environmental impact of this huge project. Built 500m underground, the plant will retain the existing dam walls at Emosson (45m high) and Vieux Emosson (180m high), dating from the ‘50s and ‘70s respectively. Twenty percent of the more than 1.5Mm3 solid spoil produced during construction work over the next eight years will be reused for the preparation of concrete; the remainder will be reintegrated locally using modern landscaping techniques.

Winning local support and placating powerful Swiss environmental lobbies were crucial for Nant’s prompt go-ahead. But pumped storage is not without its critics – Swiss energy foundation SES describes them as ‘electricity washing plants’ for Europe’s surplus coal and nuclear fired output. It also claims many plants use more energy in pumping than they produce. SES opposes further expansion of Swiss pumped storage – it estimates projects currently planned or under construction will already increase capacity from 1700 MW to 4600MW.

Neighbouring Austria is also reassessing its hydro sector in response to rising power demand and concerns over energy security. Austria now imports 10% of its electricity supplies, while hydro’s share of domestic output has fallen from 56.7% in 1990 to 43.7% last year. Earlier this year the government confirmed it will implement the ‘Masterplan Wasserkraft’ (Hydro power Strategy) published in 2008 by previous Economics Minister Martin Bartenstein.

A report commissioned by the ministry last year from Pöyry Energy claimed Austria could boost hydro output by 7TWh (or 12% of national production) to 2020 – a move that would end import dependence. The plan aims to increase renewable output from 41.4BkWh to 55.7BkWh over the next decade.

EUR2.3B (US$3.2B) will be invested to 2010, rising to EUR13.3B (US$18.5B) over the following decade. Despite the project title, only around half the extra supplies will come from hydro. Almost EUR5B (US$6.9B) will be spent directly on new hydro power projects, with EUR6B (US$8.3B) targeted on extension and modernisation of the Austrian grid and the remainder invested in other renewable sources.

Current Economics Minister Reinhold Mitterlehner claims the strategy will create 95,000 new jobs in Austria. It will also bring Vienna within reach of the EU’s ambitious 34% target for use of renewable supplies by 2020 – a near 50% increase on the 2005 market share.

The 40 projects already in the licensing process are only half the total planned under Masterplan Wasserkraft. Wolfgang Anzengruber, newly-appointed chairman of Austrian power supplier Verbund, argues that hydro and other renewables could secure a market share of over 45% if every one of these proposals was realised by 2020.

For Anzengruber, “it is unclear how Austria can hope to meet its Kyoto targets without massive hydro investments”, but he rules out any dramatic resurgence of hydro unless the government is ready to reform Austria’s plant licensing procedures. He urges Vienna to transfer licensing powers from federal states to the national government; give much greater weight to public interest arguments in favour of major energy and other infrastructure projects; and above all to speed up the licensing process, which typically takes over three years.

That call is echoed by Wolfgang Leitner, President and CEO of andritz. “We hope Masterplan Wasserkraft will involve an acceleration of licensing procedures,” he says. “Growing demand for power makes the planned pump storage plants especially vital. But that will also be a challenge to the grid network. So we need to be forward-thinking and not just focus on licensing reforms for power plant construction.”

Bruno Wallnöfer, chairman of Tirolean regional supplier Tiwag, also challenges government assumptions about future hydro growth. Tirol is the heartland of Austrian hydro. Vienna claims an extra 5300GWh capacity can be tapped from its mountains and lakes. “The Masterplan is unrealistic and Tiwag won’t be pursuing it,” says Wallnöfer. “Anything above 1400GWh is just fantasy.’ Again it comes down to planning problems. Tiwag and Verbund have just invested over EUR2B (US$2.8B) in a run-of-river plant on the Inn – ‘but licensing delays mean we have absolutely no planning or financial security for this project,” complains Wallnöfer. He claims figures in the Masterplan are based purely on topography and ignore the reality of in-built delay and hostile lobbying.

Sceptics point out that initial spending projections under the plan have already been cut in response to the current financial crisis and concerns over budgetary debt. The source of funding is also unclear. Mitterlehner insists his ministry will not support the hydro sector’s expansion directly, but Verbund and other regional Austrian suppliers are themselves partly in public ownership at national and federal state level. A new renewables subsidy law, awaiting licensing clearance from Brussels since last September, is one revenue source for small hydro projects.

“Funding is in place,” insists Anzengruber. Verbund alone is investing EUR2.5B (US$3.5B) to add 1.3TWh hydro capacity. “At present 26 hydro projects are in the pipeline, at various stages from feasibility studies to renewal of machinery and the building or modernisation of entire plants,” he says. “But the delays are intolerable and add on unnecessary extra costs.” Verbund is expanding pumped storage capacity with the 450MW Kops II plant in Vorarlberg and the 430MW Reisseck II in Carinthia, while the 480MW Limberg II pumped storage project will more than double capacity at the existing Kaprun plant from 2011/12.

Plans for follow-on expansion at Kaprun are threatened by Salzburg regional government’s opposition to a new 380kV grid linking the plant to its main market. “Limberg III won’t be built without the 380kV Salzburg line,” warns Anzengruber, while for Wallnöfer Salzburg’s stance “is proof Austria lacks any coherent national energy strategy.”

Appearing before a parliamentary committee in his role as President of Austrian power association VEO, Anzengruber urged politicians “to have the courage to implement these changes”. The industry is ready to invest EUR15B (US$20.8B) to expand production capacity – “that is an offer on our part larger than all the anti-deflation packages brought forward in Vienna,” he says. “We just want to be allowed to get on with it.”