The long-running dispute over the Solid Waste Management and Storage Facility project for the decommissioning and decontamination of Lithuania’s Ignalina Nuclear Power Plant has been settled with the signing of a contract amendment in December. 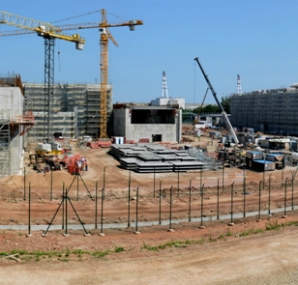 The long-running dispute over the Solid Waste Management and Storage Facility project for the decommissioning and decontamination of Lithuania’s Ignalina Nuclear Power Plant has been settled with the signing of a contract amendment in December.

Nukem Technologies said, "After the long-lasting negotiations this agreement will now provide the basis for completing the Waste Treatment and Storage Facility in the shortest possible time."

Ignalina Nuclear Power Plant said that with the contract amendment it "gains the essential project management tools, minimizes project non-completion risks and solves the disputes that led to the suspension of the project implementation and were arisen between the enterprise and the contractor."

The facilities will process the solid radioactive waste generated prior to Unit 2 final shutdown as well as the waste formed due to INPP decommissioning. The project includes two independent components to be implemented simultaneously: B2 (New Solid Waste Retrieval Facilities Design and Construction) and B3/4 (New Solid Waste Management and Storage Facilities Design and Construction).

According to Ignalina NPP, by 1 December 2013 implementation of project B2/3/4 was 78 months behind schedule. At the end of 2009, the contractor raised financial claims and project implementation was practically suspended. Negotiations began in 2010 and continued until terms of agreement were signed in March 2012; a negotiation process regarding contract amendments were initiated again in 2013.

Relations with the contractor were not helped by media reports in late 2010 that Nukem Technologies project director Thomas Pietsch had been arrested for drink driving, and that from August to November 2010 a total of 28 workers had been prohibited site access due to intoxication, according to an Ignalina NPP press release from November 2010.

As part of the contract amendment, a final project implementation schedule and milestones have been agreed. It will also allow INPP to control the progress of work on a monthly basis. The Contract amendment covers total payments of 55 million EUR for the contractor. The Project will continue to be funded by the European Union funds.