The US Department of Energy selected NuScale Power LLC for a development cost-share agreement to develop a small modular reactor design, following a similar award to Babcock & Wilcox for its mPower reactor in late 2012. 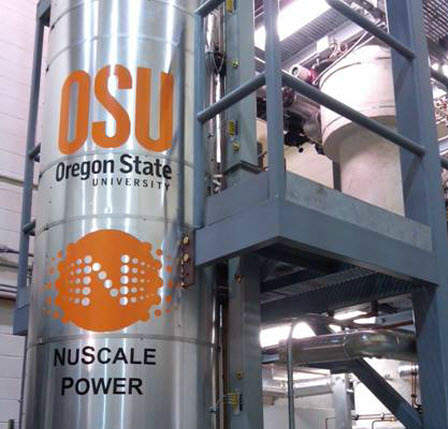 The US Department of Energy selected NuScale Power LLC for a development cost-share agreement worth up to $226 million to develop a small modular reactor design, following a similar award to Babcock & Wilcox for its mPower reactor in late 2012.

Nuclear equipment vendor Holtec, whose rival SMR-160 design was also in the competition, said it remains "firm in our decision to forge ahead on our own and bring SMR-160 to the world as a carbon-free alternative that, once and for all, would rid nuclear power of the stigma of Fukushima, Chernobyl and TMI."

It thanked partners PSEG and South Carolina Electric & Gas, nuclear utilties on its advisory board, the state of South Carolina and NuHub, a state nuclear development body, and its suppliers URS, CB&I and Kiewit. President of PSEG Generation and chairman of Holtec’s Advisory Board, William Levis, pledged continued support for Holtec’s SMR-160 programme.

NuScale Power said that it would now move to negotiate a cooperative agreement with the DOE that formalizes the public-private relationship and establishes milestones for the five-year funding programme, and also determines the level of funding. The company thanked its stakeholders, teaming partner Rolls-Royce and majority owner Fluor Corporation.

Utility Energy Northwest also praised the NuScale decision. "Energy Northwest is quite pleased the U.S. Department of Energy awarded funding to NuScale Power to aid in the development of the NuScale small modular reactor (SMR). Energy Northwest and a group comprised of public and investor-owned utilities undertook a rigorous two-year assessment of all SMR technologies and concluded that the NuScale technology is the right technology to best meet the needs of Northwest consumers over the long term. This award further validates that analysis," stated Mark Reddemann, Energy Northwest chief executive officer. "Furthermore, we recognize the importance of developing, safely operating and demonstrating NuScale SMR technology in the Northwest region as an eventual pathway to an SMR providing affordable and environmentally responsible power to Washington State ratepayers."

The NuScale design was initially developed in 2000 and has been demonstrated and in testing programs since 2003 in a fully-instrumented one-third scale electrically-heated test facility in Corvallis, Oregon. In addition, NuScale commissioned a full-scale multi-module control-room simulator in May of 2012. The NuScale reactor produces 45 MW/module.

The project will be based in Oregon and will support additional suppliers and operations in California, Idaho, Washington, Pennsylvania, South Carolina, Virginia, Kansas, Texas and Maryland.