Australia-based Oceanlinx Limited has been chosen as the fourth developer for the £28M (US$56M) Wave Hub project off the coast of Cornwall in South West England. 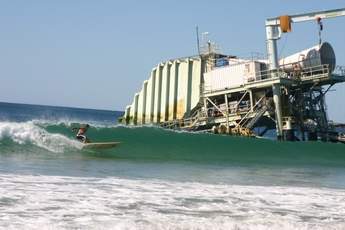 The company will deploy its wave energy converter, which combines the established science of the Oscillating Water Column with its own patented turbine technology, as part of the project. A full scale operational unit of this technology has been successfully constructed and tested at Port Kembla in New South Wales, Australia.

The company, which was founded ten years ago, is also pursuing wave energy projects in North America, Mexico, South Africa and Hawaii. Wave Hub will be Oceanlinx’s first intstallation in Europe.

The South West of England Regional Development Agency (RDA) is planning to create the world’s first large scale wave energy farm by constructing an electrical ‘socket’ on the seabed 10 miles (16km) off Hayle on the Cornwall coast.

Oceanlinx joins three other wave device developers that have already been selected to use Wave Hub to deploy their wave energy devices on a scale not seen before. The other developers are Ocean Power Technologies Ltd, Fred Olsen Ltd and WestWave, a consortium of E.On and Ocean Prospect Ltd, using the Pelamis technology of Ocean Power Delivery Ltd.

Each will be granted a lease of a sea area of 2km2. A sub-sea transformer will be provided with capacity to deliver up to a total of 20MW of power to the local distribution network.

Recently RDA announced it had approved £21.5M (US$43M) of funding to construct Wave Hub, subject to UK Government and EU approval. The Department of Trade and Industry has also committed £4.5M (US$9M) to the project.

Once completed, Wave Hub could generate enough electricity for 7500 homes, help meet South West England’s target of generating 15% of the regions power from renewable sources by 2010.