Scientists have delivered a report on future flooding risk in the UK, warning that continuing with current practices is unacceptable. 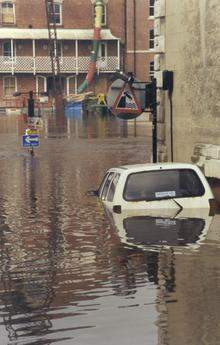 Taking a long term view of possible situations over the next 30–100 years, the team estimates that the number of people in the UK at high risk of river and coastal flooding could increase from the current figure of 1.6 million to 2.3–3.6 million by the 2080s, adding that floods could cause economic losses of nearly $US50B in the worst case scenario.

The team of 60 leading experts has spent over a year working on the Foresight Flood and Coastal Defence project, and developed four possible future scenarios dictated by the system of governance – ranging from autonomy to international interdependence – and whether social values will be consumerist or community orientated.

‘If flood management policies and expenditure are unchanged, annual losses would increase under every scenario by the 2080s,’ said the Foresight Future Flooding report. ‘However, the amount of that increase varies, from less than US$1.8B under the Local Stewardship scenario with medium-low emissions of greenhouse gases, to around US$47.9B in the 2080s under [the] World Markets and high emissions [scenario].’

David King, chief scientific advisor to the UK government warned that doing nothing was not an option. ‘In virtually every scenario considered, the risks grow to unacceptable levels,’ he said. The risks have to be tackled across a broad front, he added.

As the main drivers behind flood risk are identified as climate change, urbanisation, environmental regulations, rural land management and increasing national wealth, ‘reducing climate change will not solve our future flood risk problems by itself, but it could substantially ease them,’ the report said.

The team found that implementing a portfolio of possible responses would cost between US$39B and US$133B in new engineering by the 2080s, the equivalent of US$17.7M–53.2M more spending per year.

The report has now been passed to the UK government’s Department for Environment Food and Rural Affairs (DEFRA), which has prepared an action plan for implementing the findings into a 20-year Strategy for Flood and Coastal Protection, a draft of which is to be published later this year.

While the Foresight project focused on risks to the UK, it is thought that its findings could have wider implications, helping the global effort to understand climate change and its impacts.