First concrete has been poured for the V.C Summer unit 2 AP1000, marking the first new nuclear construction in the United States in three decades. 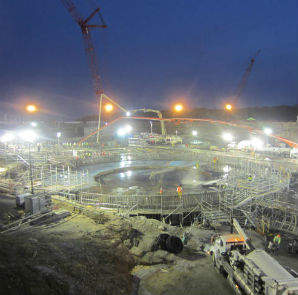 The 6-foot thick concrete basemat that forms the foundation of the containment and buildings within the nuclear island was completed at 10 am on 11 March 2013, South Carolina Electric & Gas Company (SCE&G) announced in a statement. The concrete pour covered an area of 32,000 square feet and took a total of 51.5 hours.

SCE&G and Santee Cooper are planning to build two 1117 MW Westinghouse AP1000 reactors at the existing VC Summer site in South Carolina. The reactors are slated to start-up in 2017 and 2018, respectively.

"This is an exciting achievement for SCE&G, Santee Cooper, CB&I, Westinghouse Electric Company, and others who support our new nuclear project," said Kevin Marsh, chairman and CEO of SCANA, the parent company of SCE&G.

Photo courtesy SCANA. Caption: Work on the V.C. Summer Unit 2 basemat went on throughout the night as crews continuously poured concrete into the rebar cages for 51 and a half hours.