Mavel has successfully commissioned the second horizontal turbine at the Lesichovo hydro power plant in Bulgaria. 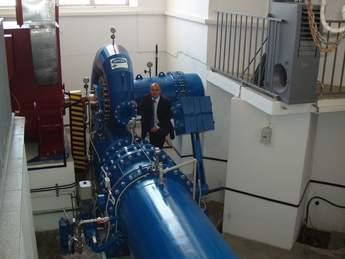 The Czech Republic-based company had been contracted last year to repair the first unit after extensive flooding in August 2005 and to deliver the second turbine for the planned 3.2MW plant.

The site, located about 90km from Sophia, the capital of Bulgaria, now utilises two Mavel horizontal Francis turbines with runner diameter of 650mm. Mavel’s scope of delivery also included the hydraulic units, valve regulators and synchronous generators (from Siemens). Net head is 57.8m and flow is a total of 6.4m3/sec.

Mavel commissioned the first turbine in January 2005. Personnel were dispatched to the site immediately after the flooding in 6 and 7 August 2005 to assess the damage. The first turbine was back in operation by the first week of November that year.

Ing. Jan Sip, Mavel Management Board Member, in the power house on the day of commissioning of the second Mavel Francis turbine at the Lesichovo site.