The Emirates Nuclear Energy Corporation (ENEC) has filed a construction license application (CLA) for Barakah units 3 & 4 with the UAE's nuclear regulator. It also noted that construction on Barakah 1&2 is progressing "on schedule," with first concrete at Barakah 2 expected before June 2013. 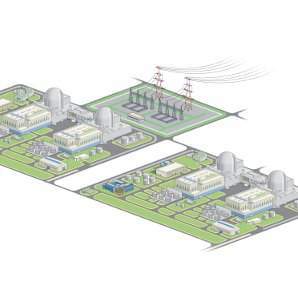 The construction license application for Barakah 3&4 (2 x 1400 MW capacity) was submitted to the United Arab Emirates Federal Authority for Nuclear Regulation (FANR) on 1 March 2013, ENEC announced in a statement.

The APR1400 reactors, to be built by contractor Korea Electric Power Corporation (KEPCO), are scheduled to begin operation in 2019 and 2020, subject to regulatory approval.

The 10,000 page CLA for Barakah 3&4 was based on the application for Barakah 1&2 and the safety analysis completed for KEPCO’s Shin Kori 3&4 in Korea, ENEC said. It added that CLA also includes the design changes identified from lessons-learned from the Fukushima accident.

The licence will now undergo a rigorous review process by FANR.

ENEC also revealed in the same statement that construction of Barakah 1&2 is "progressing on schedule." First concrete was poured for Barakah 1 in July 2012 and according to ENEC "extensive preparatory works are now underway" for first concrete at Barakah 2 "before the first half of the year."