The first stage of a project to create the world’s largest tidal array off the coast of France is in the final stages of preparation, French utility company EDF and Irish tidal technology specialist OpenHydro have announced. 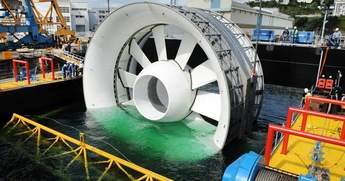 On 31 August 2011 the first of four 16m tidal turbines assembled at DCNS’ shipyard in Brest was towed from the harbour to commence a series of commissioning tests at sea prior to installation. The turbines – to be deployed off the coast of Paimpol-Bréhat and due to start generating power onto the French grid in 2012 – are supplied by OpenHydro and each has the capacity to generate over 2MW of energy.

OpenHydro and its partner DCNS have now completed the assembly of the first turbine for the Paimpol-Bréhat project. The assembly combines the turbine and the subsea base which holds the turbine in position on the seabed. DCNS have also supported the project by supplying components for the turbine and by providing the Brest facility as a base of operations.

The installation is performed using the custom designed installation barge, the ‘OpenHydro Triskell’. The barge was constructed in France by STX (Lorient) under supervision by DCNS.

Commenting on this latest development, James Ives, chief executive, OpenHydro, said: “We are delighted to be working with edf on what is set to be the world’s first large-scale, grid-connected tidal energy farm and France’s first offshore tidal installation. EDF’s vision to develop this exciting project places France and EDF at the forefront of this new form of renewable energy generation.”

The turbine will now be towed to the deployment site off the island of Bréhat, near Paimpol in Côtes-d’Armor, where it will be deployed on the seabed at a depth of 35m. For two months the turbine and subsea base, which have a combined weight of 850 tonnes and a height of 22m, will be tested.

The objective of the test is to prepare for the implementation of the tidal array which is scheduled for installation in 2012. The electrical output of the completed tidal farm will power 4000 homes.

The Paimpol-Bréhat tidal farm project was initiated by EDF in 2004 and work began in 2008 with the support of local stakeholders. The project carries a budget in the order of €40M.

Photographed in Brest is OpenHydro’s latest 16m tidal turbine being placed on to OpenHydro’s custom designed installation barge, the ‘OpenHydro Triskell’ as part of final preparations in advance of deployment off the coast of Brittany, France.