Construction officially started on unit 3 of the Vogtle nuclear power plant on 14 March. It is the second Westinghouse AP1000 reactor to begin construction in the United States, after VC Summer unit 2 just four days earlier. 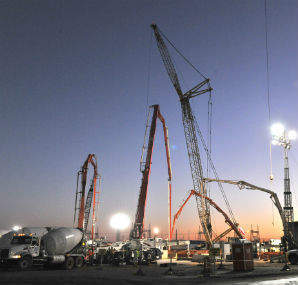 The concrete basemat for Vogtle 3 was poured in around 41 hours, according to a statement from Georgia Power, which owns the reactor project near Waynesboro, Georgia along with its utility partners.

"The first components for erecting the unit 3 containment vessel are completed and staged for installation once the basemat concrete has cured," Georgia Power announced.

It said that unit 3 is "scheduled to go on line in 2017, and unit 4 will follow in 2018." The units were initially expected to start-up a year earlier.

Westinghouse CEO Danny Roderick noted "this has been a week of momentous progress" in bringing a new generation of safe, clean, reliable nuclear energy to the United States.