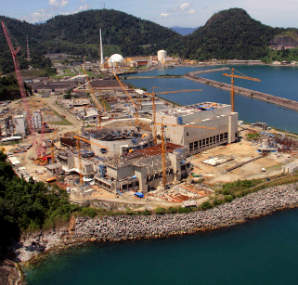 AREVA has won a contract from Brazilian utility Eletrobrás Eletronuclear (ETN) to supply additional mechanical and electrical equipment to the Angra 3 nuclear power plant. The scope of the €75 million contract includes diesel engines, electrical appliances and controls, as well as equipment for used fuel storage.

In November 2013, AREVA was awarded a €1.25 billion contract for completion of Angra 3, a 1405 MWe pressurised water reactor, located in the state of Rio de Janeiro. The Brazilian government restarted the project in 2006 to meet the country’s growing energy need and balance the energy mix.

Under that contract AREVA is supplying engineering services as well as the components and the digital instrumentation & control system for the reactor. The group is also providing assistance in the supervision of the installation works and the commissioning activities.

"This new contract demonstrates ETN’s confidence in AREVA and reflects the excellent relations that have been developed between our two companies for more than 40 years as part of the Angra 2 and Angra 3 projects," said Philippe Samama, senior executive vice-president of AREVA’s reactors & services business group.